The wrecking ball is one of the six hazards in Happy Wheels and is one of the original hazards, besides the landmine and spike set.

It is a giant, black ball swinging on a rope, causing a huge amount of force to be exerted from it. It can pass through interactive and even fixed objects with no noticeable change in speed.

The wrecking ball only has one toggle, besides setting the coordinates: users can determine how long they want the rope to be, ranging between 200 and 1000, 200 being the shortest and 1000 being the longest. 350 is the default setting.

Despite not being a very common hazard, the wrecking ball is a particularly deadly hazard, so it is advised to try and avoid it, as it can kill the character instantly, but it may also just harmlessly push the character. 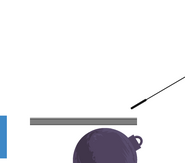 A wrecking ball bouncing off a rail and its rope being disconnected. 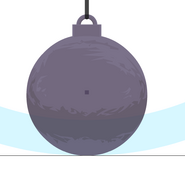 Notice the tiny 5x5 square in the middle.
Community content is available under CC-BY-SA unless otherwise noted.
Advertisement