Hello, I am Lwpeterson50, aka LWPeterson, Mr.Larry, and formally known as MrLarrytheHacker. I used to be a really avid Happy Wheels player, but now I'm mostly retired. I come back here every once in a while.

I make levels in Happy Wheels. My username is LWPeterson (without the 50). Please check them out and rate what you like! I have made over 200 levels and I have been playing for over 2 years. My most played level has over 200,000 plays. I also have a youtube channel (link above) called MrLarrythehacker. Please check it out and subscribe! I make Happy Wheels videos of course. Tutorials, letsplays, speed drawings, everything I can thing of related to Happy Wheels. I don't mind poorly made levels if they are creative and origional. Check out my pastebin for some level XML data to use in your levels, and check out my TJF Profile for all of my levels and replays. I don't really use Twitch much, I mostly use it for watching others. Right now I am mostly doing stuff on my youtube channel, but I will still reply to messages on my website. I also have the very fastest replay for two featured levels, Rouge Commander, and TJF Monster. I contributed to this wiki every day for 195 days, then it reset because of stupid slow internet. I became an administrator on November 26th, 2013. I might add some more stuff about me later. I am ranked #3 on this wiki, so I guess that's pretty good.

How I found out about Happy Wheels

So how I think I found out about Happy Wheels was that I found a game website called bored.com, and I thought "Naming a game website bored.com? What kind of name is that?" so I went to it, and I saw a game called Happy Wheels. I played the demo version it had, and I immediatly got addicted to it. I then went to totaljerkface.com to play the full version, and I've played ever since.

So I always have new levels and videos in the works. Here's a list of my upcoming levels:

March 9, 2012- Epic jetschool bus2 released, and is my first level to use the vehicle tool.

April 25, 2012- Pizza delevery released, and is the first and only other level by me to feature other users from  one of my previous levels.

May 21, 2012- After 5 months of making a level every day in Happy Wheels, I had to start skipping days as I was no longer able to keep up with releasing a new level every day.

July 1, 2012- My first video on my Youtube channel released, a walkthrough of Divine Intervention.

September 15, 2012- The first Letsplay video of Happy Wheels released on my Youtube channel. Watch it here.

November 1, 2013- The tutorial video on how to make a jet pack is released on my Youtube channel, and is currently the most viewed video on my channel.

January 23, 2013- The first speed drawing on my Youtube channel is released of Trollface.

April 9, 2013- First version of The Haunted Factory released, a very difficult and long level that is one of the longest levels I have ever made and took a very long time to make.

April 23, 2014- I joined the Your Best Levels Wiki, a great wiki where users can share their levels and get them more popular.

May 9, 2013- The first video of Happy Wheels Tutorials Season 2 is released on how to make gears.

July 23, 2013- Irresponsible Dad Stuff is released, and is the first Character Stuff video on my Youtube channel.

October 31, 2013- Happy Halloweeeeeen! released, and is the first level by me to reach 30,000 plays and has been my best rated and top played level for a very long time.

March 3, 2014- My first replay showcase is published on my Youtube channel.

August 21, 2014- =-Deserted island-= released, an is the most detailed level by me and probably my best level.

April 11, 2019- I added this sentence to tell you that I will stop adding to ths section now.

Pastebin (for level data that you can use): pastebin.com/u/MrLarryTheHacker

My Best Art Pieces and Levels in Happy Wheels

The beginning of my Helicopter Course level.

=-Deserted Island-=, my most detailed level.

Gameplay Snapshots (All taken by me) 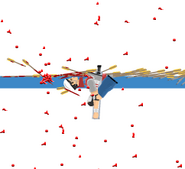 Balancing a sword on my head. 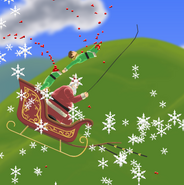 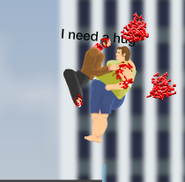 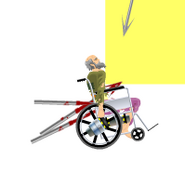 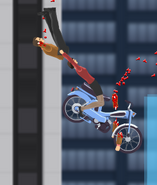 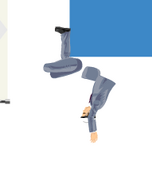 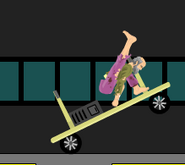 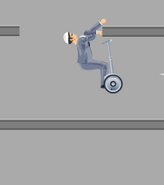 Ow my hands. I'm still attached to the segway in this photo.

Community content is available under CC-BY-SA unless otherwise noted.

Ranked #2
on this wiki