Start a Wiki
Ultimate Payback! is a featured level by sachamun. It currently has over 33 million plays, with a rating of 4.24 from nearly 30,000 votes. Lawnmower Man is the forced character.

The level starts with Explorer Guy saying "Don't move sucka!" who is about to chop an elf who is calling for help. If you move forward, Explorer Guy will chop his head. The introduction of the level then appears, which only contains the level name and the creator, then you hear Lawnmower Man say "Oh God!". After the introduction, Explorer Guy kidnaps the elf and escapes on his lawnmower and you must then go after him. There is a boost that speeds you up the hill. Now, you will land and move on bumpy grass terrain.

At a certain point, there is text telling you to "SPEED UP" and "PREPARE      TO      EJECT". Next, there is a long boost that you will use to speed up, along with text that tell you, "EJECT NOW!". If you are too late, you will crash and land on spikes. If you are too high, you will hit the spikes that are inconveniently placed in the air, preventing you to reach the ending. If you manage to reach the black screen with the text saying "Payback Time.", a matrix-like scene will play along with a beat made with sounds from the game. Lawnmower Man (you) is in the air, slowly reaching Explorer Guy while performing a bicycle/scissors kick. He will kick Explorer Guy into spikes that are directly right behind him and you will finish the level.

The killer with the elf before he kidnaps him.

Text before the ending.

A glitch where Explorer Guy and the elf get killed at the start.

A glitch caused by entering the ending as high as possible without touching the spikes. 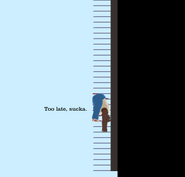 What happens when you eject too late.
Add a photo to this gallery
Retrieved from "https://happywheels.fandom.com/wiki/Ultimate_Payback!?oldid=88776"
Community content is available under CC-BY-SA unless otherwise noted.