Start a Wiki
The trash can is a stainless-steel metallic garbage can which is available in the level editor under the miscellaneous category in the special items tool. Its size is comparable to that of most characters, including Wheelchair Guy, Segway Guy, Irresponsible Dad, both members of Moped Couple, Explorer Guy, and Irresponsible Mom.

Trash cans always drop nine items. Four of these items are randomized, whereas the other five are always the same. There are as many as 324 different possible combinations of content for any given trash can, making it one of the most diverse special items. 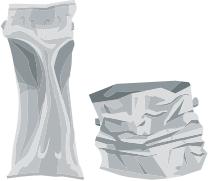 The trash can can be squashed vertically or horizontally.

All 16 items found in the trash can. 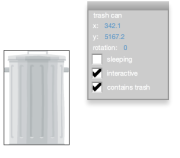 A trash can in the level editor. 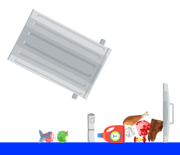 A trash can spilled open.

The deleting template used to tell that a certain article is needed to be deleted.

Wheelchair Guy looking for food.
Add a photo to this gallery
Retrieved from "https://happywheels.fandom.com/wiki/Trash_Can?oldid=86985"
Community content is available under CC-BY-SA unless otherwise noted.