The Total Jerkface Forums (or simply Forums) were the general Total Jerkface discussion boards. Many users came there every day to chat with other users, discuss about upcoming updates, share their ideas, etc. The Happy Wheels subforum was the most popular on the website and before the forums were closed held 50000+ posts, while General followed up with almost 30000 posts and Suggestions had about 14000. The latest forum topics were shown at the middle-right part of the homepage, beneath the "Poll".

The forum and poll are currently on a (possibly) temporary shutdown. The new forums may be released in the next site architecture update. No one knows when this will be. On Nov. 27, 2012, Jim updated the forum page, although he did not add the new forums, he just placed a message saying "Maybe there'll be a forum one day...". A quote from Jason about the forums: "The forums update is essentially a massive site architecture update, which is why it's taking so long."

For posting your ideas or suggestions for Happy Wheels, Total Jerkface or anything else as long it had something to do with the website. Occasionally new users tended to come there and post something off-topic or non-Suggestion related topics. This is likely because Suggestions was the first subforum seen upon entry of the forums. About one fourth of this was "character ideas!" spam. The last public screen capture of the forums showed that this subforum had 14,486 posts, ranking 3rd out of the 6 subforums.*

This was the most popular subforum by far, used for discussion of Happy Wheels in general. People tended also to post their suggestions here, and off-topic things mostly because of the popularity of the forum and the increased attention posts received as compared to the other subforums. The last public screen capture of the forums showed that this subforum had 43,614 posts, ranking 1st out of the 6 subforums.*

The General subforum was the place to talk about just about anything: ranting, groups, posting your videos, and even forum games. It was one of the fastest growing forums on the website. People tended to post their group threads in here, along with Happy Wheels related threads. The last public screen capture of the forums showed that this subforum had 34,022 posts, ranking 2nd out of the 6 subforums.*

The least popular forum on the website. It was originally created for discussing Adobe Flash related things, but because most users knew little about flash, the forum mostly inlcuded only off-topic posts or spam. The last public screen capture of the forums showed that this subforum had a mere 617 posts, ranking last out of the 6 subforums.*

For discussing about Jim's first flash game, Divine Intervention. Like the Flash forum, not much activity went through Divine Intervention, mainly due to the game's scarce popularity as compared to Happy Wheels. The last public screen capture of the forums showed that this subforum had just 825 posts, ranking 5th out of the 6 subforums.*

For posting your bug reports of Happy Wheels, or the website itself. There was slightly more activity on this forum than the Divine intervention forum or the flash forum. The last public screen capture of the forums showed that this subforum had 2,123 posts, ranking 4th out of the 6 subforums.*

(Note: The last public screen capture was taken on July 10th, 2011 and can be viewed at the Wayback Machine.)

From around 2006, when Jim first made his site, he had a forum on it that worked much in the same way (although the old one wasn't a forum system he generated, unlike his 2010 one), the motto stated it was "the most popular forum on the internet". The forum had very little users, and had 3 sections:

The forum, and all its posts, were gone when Jim overhauled the site in 2010.

The index of the old forums. 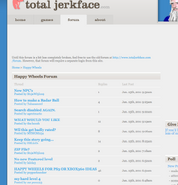 What the forums looked like right after they got disabled.

Currently, the forum page does not appear at the top.
Add a photo to this gallery

Retrieved from "https://happywheels.fandom.com/wiki/Total_Jerkface_Forums?oldid=85673"
Community content is available under CC-BY-SA unless otherwise noted.