You start on a shed with a windmill spinning on top. The Ghost Train will burst through the shed and you can ride on the train. The train contains from front to back, Wheelchair Guy sitting on the back of the train engine, a flat car with a crate on top, a container full of arrow guns, a passenger car with Lawnmower Man inside, an empty passenger car, and a half destroyed car with a trash can, Moped Guy holding onto the handle and a guitar, and Explorer Guy sitting on top of the car.

The train will go up a cliff and then land and ride on an incomplete bridge. (If you fall, you will land on nothing but land with cacti.) It will then ride off the bridge and ride on land. (If you fall here, you will see spider webs and spiders. At the bottom, there is a treasure chest. If you go touch it, you will collect a token hidden behind it and automatically win the level.) The train will reach a house, break the glass, and knock away two eagles. The train will then ride off the cliff ahead and land again. (If you fall, you will end up in a pit of wolves that will bite you.) There are telephone poles that contain harpoon guns, followed by Explorer Guy attempting to stab you with his spear. The train will ride off a cliff again, but there isn't any road ahead, so you and the train will fall for a few seconds and land on finish lines hidden by "DEAD END" signs. 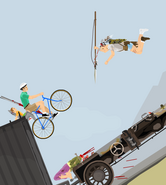 The (dead) end.
Add a photo to this gallery
Retrieved from "https://happywheels.fandom.com/wiki/The_Ghost_Train?oldid=81767"
Community content is available under CC-BY-SA unless otherwise noted.