Start a Wiki
The Antirobics is a featured level by Kreftus. It currently has over 4,000,000 plays, and a rating of 4.00 from over 2,000 votes. Segway Guy is the forced character.

Emerging out of an apparent cryogenic unit of sorts, the player emerges onto the outskirts of a city's ruins. Climbing onto a collapsed bridge, Segway Guy can either get promptly eviscerated by a robot, or fall through a opening in the structure and come across a codelock which will send the player into a nearby warehouse to find the power box to activate the lock. Once done, the player navigates the sewage system and eventually rappels down into an improvised shelter of sorts, and a couple gives some exposition as to the Antirobics, a resistance cell predictably at odds with robots, and send the player on their way to destroy them all.

Navigating some more sewer pipes, the player will emerge into a suburb in ruins. This section is relatively straightforward, with the wrecks of a two storey mansion which requires the player to jump off the top floor to circumvent the backyard fence, stealthily bypassing some robots on guard, before coming across a school bus lodged in a bridge, which the player is to break into the back of. Fail to make the jump, and the player ends up in the river, with no chance of escape thus necessitating restarting the level.

Some ways after emerging out the other side of the bus, is the final boss encounter, presumably some sort of Robot overlord. After the typical villainous monologues, the boss fight segment commences, mostly consisting of avoiding red areas where the attacks will be projected in a beam of light. After this segment, the robot overlord will proceed to project beam attacks across the entire arena, the cooldown to which the player must break into the nearby building and disable the robots for good, cuing the signature Kreftus ending credits.

First sight of a robot-dominated landscape.

Going up the warehouse elevator.

Going into the sewers.

The beginning of the boss battle.

Disable the robots for good. 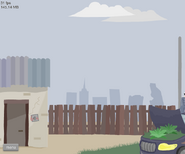 Shack on street number 666.
Add a photo to this gallery
Retrieved from "https://happywheels.fandom.com/wiki/The_Antirobics?oldid=91760"
Community content is available under CC-BY-SA unless otherwise noted.