The level starts with Wheelchair Guy sneaking down from above, stabbing Irresponsible Son with a trident and thus taking him away. Both Wheelchair Guy and Irresponsible Son will play a moaning sound here. Two long drums play, and the level introduction then appears, showing the starred actors, which include Liam Neeson, Steve Buscemi, and it also says "And... Let's say... Macaulay Culkin from 1986?". You then get launched forward, and Irresponsible Dad says "Oh god". White text saying "After him!" appears as you pass by. While going up the ramp, boosts will push you up, and for each block on the ramp, there is white text that says "You'll have to bypass the sneaky pedo's security forces". After going up a ramp, you will find yourself at level one, titled "Blade Experts." Here, three NPCs which include in order; Moped Guy, Segway Guy, and Pogostick Man, with blade weapons will try to attack you.

After you have defeated them, you move on to level two, titled "Man with a Large Gun." To pass this level, take the elevator to the roof, go inside the building with the Explorer Guy NPC, and push him forward so his gun will backfire. You will then continue on to level three, titled "Pedo's Lair," six Wheelchair Guy NPCs will try to stab you with tridents. After avoiding them, you will move on to level four, titled "Leap of Faith,". A block will come up above you preventing you from going back, and you eject from your bike and grab onto the "Flying Fox." Once you get to the countdown, everything below you will be deleted, leaving you with only yourself and the "Flying Fox". Text onscreen will say "Hold on and listen carefully." "You'll have to perform a sneak attack via the roof. When I say "NOW", you MUST let go. Not a second too early or too late. You must trust me. I am... the voice of... er... Morgan Freeman", and you get to the top, and the countdown begins. When to let go, if done correctly, you will need to take the axe with you when you fall. You will fall downward through spikes and stab Wheelchair Guy, who kidnapped your son (and a baby), you will then win the level. Text saying "Level Five Death From Above" will also show. 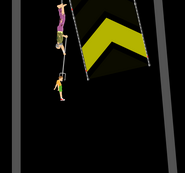 If you press C while Irresponsible Son is being taken, you can see the mechanic that brings him up

The ending.
Add a photo to this gallery
Retrieved from "https://happywheels.fandom.com/wiki/Taken_3?oldid=87510"
Community content is available under CC-BY-SA unless otherwise noted.