Start a Wiki
TJF Monster is a featured level by GHAIS. It currently has over 5,900,000 plays, with a rating of 3.79 from over 3,400 votes. You can play as any character. However, Helicopter Man and Santa Claus are forbidden and will not work.

You begin in an area with blue blocks with a character recommendation list to the left. You proceed over a bridge and come to a sleeping pink Total Jerkface Monster, which then wakes up. He screams a Lawnmower Man sound, and his mouth and eyes open. His eyes will follow where you go (If you go to the right, his eyes will shift to the right. If you go to the left, his eyes will shift to the left). He rotates his flag down to crush you on the right. If you go to the left, he breaks the bridge with his fist. If you go down, the level will say "ESC + R". You must get your vehicle onto the flag, which will launch you to the right and into a blue cave. You must make it where the lighter blue spot is, which is where you can break through. If you miss it, you go down and there will be a question mark that when you hover over it, will say "The wall above seems destructible. If only there was something that could launch me in the air".

As you go through the cave, the Total Jerkface Monster's hand suddenly crashes up through the floor, and you need to go over his hand. You then come to a wall which you need to hit three times in order to break through. You crash through a wall and exit the cave and come to the monster again, who has his head coming out from the floor. He swings his arm up, and blue blocks fall from the ceiling after each swing. For each three swings, he closes his eyes, and you must hit him; this lowers his health. After 3 hits, his arm falls and the ceiling starts collapsing. A rock breaks the floor to your left, showing a tunnel. You must escape into the tunnel or else you will be crushed by the rocks. After the tunnel, you fall out and you fall for a few seconds before triggering the victory and seeing the victory screen, which is an advertisement for Ghais' level -=Flappy Bird=-. 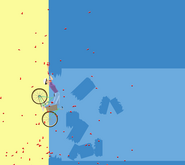 Crashing through the wall and into the cave.

His hand coming through the floor.

Breaking the next wall.

Breaking the wall and about to face the last TJF Monster.

The TJF Monster's final attack, where he throws up and you must dodge it.

Breaking through the last cave.

The end screen, with an advertisement for his level -=Flappy Bird=-.

The level when it was hacked and temporarily replaced in July, 2014.
Add a photo to this gallery
Retrieved from "https://happywheels.fandom.com/wiki/TJF_Monster?oldid=91420"
Community content is available under CC-BY-SA unless otherwise noted.