You start on a patch of sand, with a green pipe to your right. When you go forward, you will soon pass by Yoshi. You then go on a platform over a gap, and enter the first portal building, with Toad in it. Above Toad is a speech bubble that says "Mario! The princess has been kidnapped! You need at least 5 power stars to open the door with a star on it, the princess must be inside!".

Once you go forward, you will pass a door with a star on it. You fall off the floor you are on, and go on another set of stairs going up. Here, if you go forward, you will enter the portal of Bob-omb. If you go back, you will go down the stairs and enter the portal of Whomp. You must go in the Whomp's Fortress portal in order to win the level, but going in the Bob-omb portal will help you get 5 power stars, but it is not required.

If you go in the Bob-omb portal, you will approach a red Bob-omb, with a speech bubble above it, that says "Hey you! It's dangerous ahead. King Bob-omb does not like visitors.". Once you go forward, you will go up a platform that forms a ramp, and you will see a chain chomp swinging on a chain. You need to avoid him in order to stay alive. If you touch him, you are very likely to get crushed. If you pass him, there will be a swinging platform which rotates back and forth over a pit of spikes. You must get on the platform and go to the other side without falling into the pit of spikes.

Once you cross the pit of spikes, you will go on some sand, with a hole in the sand. In front of you is a platform that you push up when you touch it, and right after is a custom made homing mine that comes after you and explodes when he touches any part of you. In front of you now is another power token. Here, if you are able to get above the small grassy hill, you are able to go forward. If you go all the way forward to the edge of the map, the text "Super Mario 64" will show. If you go back where the custom homing mine was, you will go up the platform you came up under earlier.

You then go back, on some dirt, and there is a small gap between two patches of dirt that you must get over. Once you get on the second patch of dirt, a black ball falls down at the end of the second patch, and starts rolling at you. The patch is covered with hidden blade weapons, so you must avoid touching it. You must go on the first patch of dirt again, and the black ball will fall in between the gap, and fall into the hole in the sand below. When you go back again and go over the second patch of dirt, you will fall down onto a dirt and grass platform with King Bob-omb on it. You then must push King Bob-omb off the platform. Once you do, dirt-grass blocks will fall down, allowing you to go back into the first building.

You must go down the stairs to the Whomp's Fortress portal to beat the level.

When you go in the Whomp's Fortress portal, you will need to get over a Piranha Plant, because it has hidden blade weapons in it. When you get over the plant, you will fall down onto a patch of dirt that is fenced, and the fence stops you from falling off the dirt path. When you go forward, you go down some (Dirt bricks?), and you come across some Thwomps. You have to be careful not to get crushed by the Thwomps here. If you go on top of the first Thwomp, he will lift you up to an area with another blade weapon plant, and another energy star. When you go back down, you must dodge the next two Thwomps.

You then come across a large spinning platform, with a ditch underneath that the platform takes up. When you go into the ditch, the platform will push you up, and you must successfully land on the next platform. Now, the bullet bill will come at you, and you must either go over him, go in the small pit in front of you, or go back to the large spinning platform and you will most likely dodge him. Once you dodge bullet bill, you go forward, and you then you go into another Whomp's Fortress portal, and you enter another building with writing in blood that says "You're Next". You then go down some stairs, and exit the building with another power star right in front of the exit. There are two pyramids in the background here. You then go on a flat surface, where there will be a Tox box that comes rolling at you, and you must go in the lighted spot that is non-interactive to pass him. When he gets to the end of the flat platform, he will stop rolling and he will start spinning in place.

You then enter another building with Toad in it again. . If you collected less than 5 tokens, he will say "Shit Mario...you barely got any star damn it! Because of you, the princess will die. FUCK!", and you will need to go back to get at least 5 tokens, If you collected 5 or more tokens, he will say "Good job Mario! You collected enough stars to open the door. Now enter the last stage and save the princess!", and you can continue the level. You enter the doors that are now open. You go forward, then you fall down and the level now has a black background. Here, if you ever fall down, you can always go back, and once you go back to the beginning, boosts will push you up and over. When you go forward, you will need to pass over two large green platforms, with a pin joint in the middle. The platform rotates depending which side you are on, and you must cross without falling off. Then, you must make it on a ferris wheel, get on one of its four platforms, and get to the other side.

Next, you need to dodge some amps, you then fall down a green pipe, and you are now at the final battle with Bowser. Here, the ground starts shaking, and the floor that is made of a single row of rocks will start to fall down one by one. You must push Bowser into the lava below in order to proceed. Once Bowser falls into the lava, you go forward, and you now go onto the finish line with the princess eating cake, with another power star above, and a speech bubble above Princess Peach saying "Mmmm this is so good".

At the chain chomp.

An easter egg where you go above the hill and go forward. 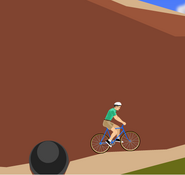 The ball now fell in the hole.

At the area above the first Thwomp.

At the bullet bill.

At the Tox box.

At the final part.

If you ever fall down here, you can always go back and you will be boosted up to the beginning.

Approaching the final battle with Bowser. 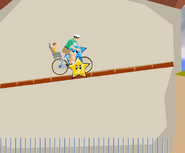 For a split second, you will notice the yellow star move away from the blue star when you get a token.
Add a photo to this gallery
Retrieved from "https://happywheels.fandom.com/wiki/Super_Mario_64?oldid=88235"
Community content is available under CC-BY-SA unless otherwise noted.