You start off on a small podium (with "51" on it, which later shows that you are the 51st clone in the test), where you were placed from a chamber above. You move forward, opening two doors to begin your tests. There is text (but not text from the text tool as it has not been released yet) ahead saying, "SLOW" and above that, "WELCOME SUB. 51", "COMPLETE TESTS TO BE RELEASED" and "SLOW".

Now, there's text that says "TEST 1.". Test 1 contains two fast spinning gears that will possibly kill you if you touch it, but there are triangle shapes that will lead you up to the gears, so you must go slowly up them. Just ahead is more text ahead that says "TEST COMPLETE". Next, is Test 2. Test 2 contains a ramp with a spike set above the gap, and gears that will crush you into the "SUB REC BIN". After that, there's more text that says "TESTS COMPLETED", "PROCEED TO EXIT" and "SLOW". As you move ahead, you will enter the "termination" room with a red gear attempting to move ahead and kill you. The pathway back will be blocked and you must escape.

Once you reach the "IN" in "TERMINATION", a platform will drop, causing you to fall into a grey pipe, and at the end of the fall, land on a girder. Above the girder, there are a few clones of Wheelchair Guy and his wheelchair, who are numbered "52", "53", "54", and "55". Ahead is a gap that you will fall into. Lastly, there are more rotating gears, they're rotating slowly, and there's an opening on one part of the gears that you have to go through. The rotating circle will show when it is safe to proceed. The higher the circle reaches, the closer the safe area will appear. After that, you'll reach the finish line. 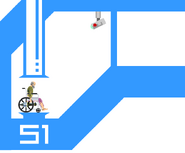 The end.
Add a photo to this gallery
Retrieved from "https://happywheels.fandom.com/wiki/Sub._51?oldid=77234"
Community content is available under CC-BY-SA unless otherwise noted.