Start a Wiki
The soccer ball is a miscellaneous item. It was added in the first release of the game. It is based on the ball used for soccer, or football, a sport where you try and kick the ball into a guarded net. The soccer ball can only be interactive, and doesn't have any toggles, such as making it sleep, rotating it and changing the size of the ball (which stays at 20x20px). The soccer ball can not be attached to pin joints nor triggers. It is the smallest special item in the game, even smaller than the bottle. It is also one of the only items in the game that can also bounce.

The ball seems like it was based off of Jim's YouTube video "SoccerTime". The soccer ball is commonly used in don't move levels with Irresponsible Dad, where he will hit the ball, causing it to bounce around, and eventually end up back with him at a later point in the level. This will repeat several times until he reaches the end (although the soccer ball does not come with a net, some users make nets so at the end of the level, Irresponsible Dad will score a goal). It is also often used in ball throw and ball fall levels. With a density of 0.88, it is the lightest special item in the game and the only special item with a density less than 1.

Irresponsible Dad kicking a ball with the bike's front wheel. 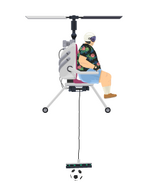 Helicopter Man picking up a soccer ball with his magnet.
Add a photo to this gallery
Retrieved from "https://happywheels.fandom.com/wiki/Soccer_Ball?oldid=89229"
Community content is available under CC-BY-SA unless otherwise noted.