Signs are a type of special item added on May 12th, 2011, with V1.38. There are thirteen different kinds of signs that tell you when to slow down, stop, turn, and other warnings. Signs are common in levels. In the Level Editor under Special Items, Signs appear 10th in the list of Miscellaneous Items. Jason also made a threadforsign forum.

On the picture to the right, you can see all of the sign types in order. 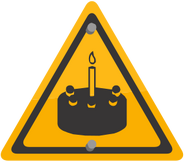