Shapes are the general objects in the level editor. Shapes are mainly the most used part of the average Happy Wheels level. There are three kinds of shapes:

Their width and height can be changed as well as the coordinates. Rotation is also an option except for the circle. When rotating an object, the values go from 0 up to 180, and then, descend back down to 0 as a negative number. In the mobile version, the rotation is referred to as the angle and the values of the angle go from 0 all the way up to 359, before returning back to 0. If someone tries to make the value negative, it immediately turns into the respective positive angle.

The shape's color can be adjusted by using the color selector (a color palette), or pasting color hex codes. There is no color palette in the mobile version. Instead the user is provided with three different sliders, each of which affects the level, strength and brightness of a color. The first slider is responsible for the level of red emitted from the shape, the second one for green and the third for blue. The default color for a shape in the mobile version is as follows: R: 61, G: 136, B: 199.

Shapes can be set to become interactive, fixed and sleeping. Making shapes interactive makes them touchable and able to be collided with other things. Unchecking the interactive box will make the shape untouchable and used as art. For the fixed and sleeping options, the shape must be toggled interactive before toggling. With the fixed option untoggled, the shape will have enabled physics and mobility. Checking the fixed option will make the shape stuck at the same place all the time, making it motionless. For the sleeping toggle to function, the fixed toggle must be unchecked for the shape to be affected. A sleeping shape has no physics applied until something collides with it. For a sleeping shape to be awakened, something non-fixed and non-sleeping must touch it. It can also be be awakened from its sleep by a trigger.

You can change the opacity, in which 0 is completely invisible no matter what the color, 50 is a light version of the color and 100 is bold. 100 and 0 work the best.

The shape density can also be changed. Density works like weight, the higher it is, the heavier the shape is. The maximum density is 100 and the minimum density is 0.1. A shape density of 0.0. (or simply just a ".") will result in the Black Hole Glitch. The same density range applies for the mobile version, but you cannot have densities with decimals in them. However, it is possible for a shape in the app to have a density of 0 by just typing in "0" (a shape with this density weighs less than a shape with a density of 1).

Shapes can be grouped with other shapes, so if a shape is in a group, the group will be a singular object. For example you can group a shape with four other shapes and they will all work as a single object and will all fall down, rotate, and move at the same time. Fixed shapes can't be grouped. You currently cannot group shapes in the mobile version.

Shapes can be jointed with the pin joint tool (as long as the shape isn't fixed). Connecting 2 shapes together or 1 shape and an object with a pin joint will connect them together. Connecting a single shape without another shape or object being connected will joint the shape to the background.

Rectangles are box-like kinds of shapes. They have four sides and four right angled corners. You can edit the width and height of them, maximum of both is 5000 and minimum is 5. The default width is 300, while the default height is 100. Rotating them is also an option. This is also the most commonly used shape.

Circles are circular shapes. Their width and height are locked together so they will change at the same time when either one is changed. Like the triangle and rectangle, highest value of width/height is 5000. The default width/height is 200. Rotating a circle will not affect anything. In the v1.61 update, the new inner cutout option is supposed to be used for wheels. The inner cutout, however, is only a visual change. This is a requirement of Box2D - the game's physics engine, as stated by Jim in a news post.

In the mobile version, the minimum and maximum values for the size of a circle are the same as the ones for a rectangle (i.e. 3.20 and 3200 respectively). The default width/height (which is simply referred to as the "diameter" in the app) is a different value, which is 128. However, before the v.1.0.8 update, the maximum and minimum values for the diameter used to be 5.76 and 5760, while the default value for the diameter used to be 230.40.

A triangle has three sides and three corners, hence the prefix 'tri-', which means three. They can be adjusted with their width and height. The maximum width and height value is 5000, but the minimum height value is 15, with the minimum width value being 5. The default value, meanwhile, is 200. These triangles are always isosceles (at least two sides are the same length). 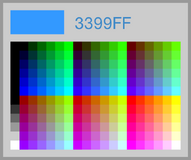 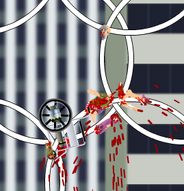 The inner cutout on the circle. Notice how this is a visual effect and Wheelchair Guy gets crushed inside the circles with an inner cutout.
Add a photo to this gallery
Retrieved from "https://happywheels.fandom.com/wiki/Shapes?oldid=91007"
Community content is available under CC-BY-SA unless otherwise noted.