Start a Wiki
Rogue Commander is a featured level by JigsawVoorhiesKrueger. It currently has over 3,000,000 plays, and a rating of 3.06 from over 6,500 votes. Segway Guy is the forced character.

The screen starts with an intro that you cannot move while it is playing. The level starts black, and then fades away, revealing a large eye. The eye blinks, and then opens up wider. The screen turns black for a second, and you start to hear noises from fans. Then the level will show a TV (not the one that can be found in the level editor), with two Segway Guy NPCs on the bottom left of the screen. Three different screens show within the TV. The first one is a mission brief, explaining what has happened. Next, the TV will show the map of the route, which shows you as a red line, starting from the beach and going further inland. The third and final screen are the objectives. The objectives are as follows:

You must complete all five objectives in the level, each one having a token that you must collect. Then, the "Challenge Accepted" face meme shows up, and then the level shows you inside your 'helicopter'.

Once you exit the 'helicopter' that is floating above water, you will go onto the sand on the beach, go up some stairs, and then go onto a sidewalk with a token on it that says "OBJECTIVE-1 COMPLETE!". When you go forward, you will go onto the street, where you will pass over a dead droid, and pass a futuristic looking car (A Pontiac to be specific, as there is a Pontiac logo on the front of it). Then, you will go on the other sidewalk, pass a tree, go in front of a building, and then you will come upon three droids in the ground with two blade weapons acting as the ground, and a lever to the left. When you push the lever, the droids will activate and fly up. However, the jets attached to them do not have their angle fixed, so it is likely that the robots will take a couple of seconds to get out. Here, you have to be careful not to be killed by the blade weapons as you pass over them. It is best to jump over the lever and try to get as far as you can to avoid getting stuck or killed here. You then jump over two steps over a small part of the ground that is a sidewalk, and come upon another droid attached to the ground with a chain. Once you touch the droid (this one having its jet angles fixed), the droid's jets will activate, and it will break off the chain and fly into the air a few seconds after. After that, you complete the second objective with the second token.

Next you come upon a small sign on a brick building that says "HERITAGE-LISTED BUILDING 1978-2046". Part of the brick building has been destroyed, and you pass a flag that is vibrating in the breeze. You then go on another street, with a broken vehicle on it. Once you cross the street, you pass a tree, a deserted building with plants growing out of the window sills, and a plant growing in the sidewalk. Then, you go on another small street, with the third token on it.

Once you cross the street, you pass another deserted building. On the next street, there is a large crater on it. Next, you enter a building with a sign that says "CLEARANCE; 7'10" " in front of it. Once you enter, there are caution lines on the wall. You then approach some ramps that closely resemble stairs, with a green exit sign above. You go up the first ramp. You then have to go back up the next ramp. At the beginning of the next ramp, there is the fourth token.

Next you go on the second floor, where there will be a pipe with water going out of it, and a shallow puddle on the floor. When you continue back, you go up another ramp. Part of the wall is broken, but you cannot escape out of it because of an invisible fixed shape. You have to go forward, up another ramp leading to the next floor. Once you are on the next floor, you will see the rogue commander behind a red laser. This laser only blocks you from reaching him, and does not kill you. A platform will bring you up to the next floor above. Here, if you go back, you will find a purple easter egg with golden spots, with red and two shades of blue that rests on a stone pillar. Bamboo and a torn green cloth are over the easter egg. If you go forward, there will be a pipe above you, with part of the pipe being broken with a bit of water leaking out. You then go onto a pipe that is part of the floor, and the pipe breaking off knocks the head of the rogue commander off. You then go over the now dead rogue commander to take the fifth and final token which causes you to win the level. Soon after you hit a 'black hole' that shows you over the dead rogue commander, with JigsawVoorhiesKrueger's three heads to the left. At the bottom, text says "The new polygon tool was not used in this level, so all the detail you see is made from shapes ;)", with orange text above you to the right that says "MISSION COMPLETE!".

The eye at the very beginning.

The Map of Route.

The Challenge Accepted screen showing up after the objectives. 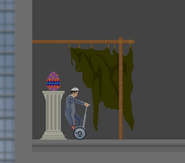 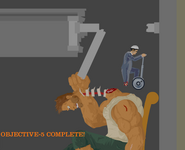 About to complete objective 5 and win the level.

The end screen, featuring JigsawVoorhiesKrueger's three faces.
Add a photo to this gallery
Retrieved from "https://happywheels.fandom.com/wiki/Rogue_Commander?oldid=88509"
Community content is available under CC-BY-SA unless otherwise noted.