Start a Wiki
Pyramid of the Gods is a featured level by bobisdacool1. It currently has over 8,000,000 plays, and a rating of 4.09 stars from over 5,800 votes. Irresponsible Dad is the forced character.

You start in a desert with two pyramids in the background and a brown cobra in front of you. You go down a small hill and enter the pyramid. A few seconds after you enter the door closes behind you and the room darkens. You knock over a statue of Anubis and over a button that triggers arrow guns if pressed. You then fall through a weak spot in the floor, and come to a new hallway. To the right is a door which can only be opened when the light beam hits the silver mark on the floor, and to the left is the Staff of Anubis which you must pick up in order to bend the light. After opening the door, you go down a hallway lined with Anubis statues whose eyes turn red as you pass them. A blue portal spins, and the god Anubis appears in front of you wielding a scythe. Each time you hit him, he swings his scythe at you, and then raises it back up after you back up a slight distance. You need to hit him four times in order to defeat him. You next pick up a sapphire and move onto an elevator. When you reach the top, there is some crushers that you must dodge, and you next get a potion to protect yourself from black magic; then you must go back through the crushers, and back to the elevator.

The elevator takes you down, and you head down a hallway of sarcophaguses, their eyes turning red as you pass them. A red portal spins and the pharaoh Ramses appears in mummified form, holding a javelin in his left hand and wielding black magic in his right. Arrows shoot down at you from the ceiling, while a spike wall is to your left. Each time you hit Ramses, waves of black magic come and sweep you towards the spikes, which you must avoid. Ramses takes 5 hits to defeat, after which you pick up his key, and go back down the hallway to the elevator.

The elevator brings you up again. Your momentum this time launches you at some spikes on the ceiling of the shaft, which you must avoid. Next you must navigate for a third time down the hallway of stone crushers. The door is unlocked and opened, and you collect a ruby. You then proceed onto another elevator which brings you down.

You get off the elevator, and come to a room with giant spiders coming down from the ceiling, which you must also dodge. You then pass a hieroglyph of the Eye of Ra, which turns red as you pass. A yellow portal spins and Ra appears wielding a spear in his right hand, while a spike wall lowers to your left. Each time you hit him, he swings his spear upwards, while the sun disk above his head shoots out a laser beam towards the ground, both of which you need to avoid. You need 5 hits to defeat him, after which you pick up the final jewel, a diamond. You then exit the pyramid and come to your getaway vehicle - a Morgan Aero Supercar. The victory is then triggered, and the end screen comes up with you running over a snake and speeding off in the distance in the car.

Part of the unintended area that could be entered by going above the entrance to the pyramid. 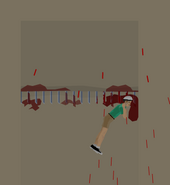 Irresponsible Dad impaled into the spikes above the elevator.

There is an invisible roof that prevents you from climbing on top of the pyramid.
Add a photo to this gallery
Retrieved from "https://happywheels.fandom.com/wiki/Pyramid_of_the_Gods?oldid=87094"
Community content is available under CC-BY-SA unless otherwise noted.