Popular user-made creations are common user-made contraptions, hazards, mechanics and other various special items consisting of multiple objects and tools (usually a pin joint) already found in the Level Editor. Because they are user-made, none of these creations can be found in the Level Editor, and must be manually made. There are, however, some exceptions as to what counts as a custom creation, both artwork and vehicles do not count as a user-made contraption, as the first is usually aesthetic, while the latter is a feature in the game. Only physical objects which change the playing experience are listed.

Chompers (also known as snappers, scissors, and clappers) consist of two interactive items (often blade weapons) connected to a pin joint on the back ends. Unless the two interactive items are not blade weapons, as soon as one latches to the player, it is usually a matter of seconds until they end up easily ripping apart a character, otherwise its only threat is crushing a character. Several user-made levels use them, including the most recognizable use in the featured level, --=|Obst. Course|=--, and various other levels, usually consisting of "Justin Bieber" (Irresponsible Son or an Elf) getting thrown into a pit of chompers. Chompers can also be used with the high speed spin glitch so in most cases as soon it is touched it will kill the player.

A gear is a group, which consists of a very dense circle in the middle with parallel rectangles around it. A pin joint is placed onto the center of group. Crushing gears use two of the same gears and pin joints to crush a character when the player falls in between the gears. The pin joints' torque value is usually set to a high number (for example, 30000), and the motor speed is both set to a low rotating speed, and set to an absolute value of each other. These are common in meat factory levels.

A cushion is used to soften the landing of a character to prevent him or her from being injured or dying from high falls. Cushions are commonly used in quiz levels where Segway Guy falls down after answering a question correctly onto a cushion.

A cushion can be made in two ways:

An elevator consists of a group containing wide rectangle with a thin and long rectangle directly below it jointed to a long collision 3 rectangle that is also jointed to a big collision 3 circle jointed to the background. The pin joint that pins the circle to the background usually has a low motor speed to keep the character from either having a hard time getting entering, or getting launched into the air too much. They are used to allow things to be lifted or lowered to different heights. The creation of the elevator is now more easier using the sliding joint in newer versions.

Jet Packs are simple vehicles that consist of a few non fixed shapes that fit around the player and jets that are either automatic, or activated by pressing space. Some levels involve the player flying through obstacles such as spikes using a Jet Pack. A jet pack can be made by placing some non-fixed blocks around the character, grouping them and setting them as a vehicle, then place a jet so it is overlapping the vehicle, and attach the pin joint so the jet and the vehicle are now attached to each other. Set either spacebar, CTRL, or shift to 2, which will make the jet fire once the selected key is pressed, and check 'fixed angle' on the jet, which will not allow the jet to turn.

A rope is a creation made out of some non-fixed rectangles with pin joints. They were first used in Jim Bonacci's level Rope Swings.

Gears in the level editor.

An example of a chomper in the level editor.

An example of a piston/crusher in the level editor. 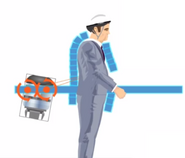 Making a jet pack in the level editor. 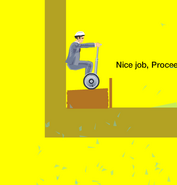 The type 1 cushion being used in a quiz level.

An elevator in the level editor, with two invisible 0 opacity collision 2 blocks on each side of the elevator.
Add a photo to this gallery

Retrieved from "https://happywheels.fandom.com/wiki/Popular_User-made_Creations?oldid=91040"
Community content is available under CC-BY-SA unless otherwise noted.