Operation Detonation is a featured level by bobisdacool1. It currently has over 2,300,000 plays and a rating of 3.71 out of 1,800 votes. Segway Guy is the forced character.

You begin outside of a parking garage with a message box explaining your mission. When you go into the garage, 3 Moped Man guards shoot at you. You have to jump and lunge to avoid the guards, and after killing them, you come to an elevator, from which another guard comes to try to stop you. You go up the elevator and come to a hallway with 2 more guards, and then you enter a room with two people working on laptops. You shoot them and take the data from their computers before moving down a second elevator.

You now enter a factory section with revolving platforms and a set of pistons blocking your way. You must jump onto the revolving platforms, take out the guard at the top, and jam the gears with the box to turn off the pistons. From there, you enter a second room with several tables covered in chemical baths, along with an electrical barrier blocking your way. You must get onto an elevator, jump over the swinging lights, take out the guard, and pull the lever to turn off the electrical barrier. From there, you crash through some glass and onto an unstable platform, which drops you in front of the boss.

The boss is some sort of robotic cat. It shoots a plasma beam from its mouth every few seconds, and you must shoot it in the mouth to stop the beam. The boss then sends out some rockets, which blows open the room to the left. In that room is a lever, which will electrocute the boss briefly before it starts lunging towards you. Its banging around causes a platform to lower, which leads you into a room with a box and a gear. After you jam the gear and come back to the boss, a giant gear crushes the boss and you are able to pass. You set down some charges before ejecting into an escape vehicle. Some explosions sound behind you as a wall of dust pushes you out of the garage. An endscreen appears, showing the building behind you exploding.

Jumping over the lights. 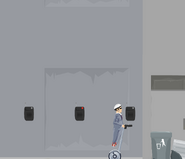 Escaping in the Aston Martin.
Add a photo to this gallery
Retrieved from "https://happywheels.fandom.com/wiki/Operation_Detonation?oldid=91166"
Community content is available under CC-BY-SA unless otherwise noted.