The player starts next to the North Pole sign. Santa tells his elves in a frustrated manner to move. Then, a polar bear tells Santa that the launch pad is broken and that he must be careful. Up ahead are a few elves making "toys" with the left elf carrying a landmine annoyed about it not working. Then, there's a very steep slope. Above it are knives attached to a chain hanging from the top.

Next, there are more elves and candy canes. There is text telling the player how to fly as Santa Claus followed by a big gap with the other side containing more knives attached to a chain hanging from the top. After the gap, there are more candy canes and elves followed by another gap, an elf holding onto the ledge calling for help, and another chain hanging from the top with the same set of knives. Next, there are even more candy canes and elves. Lastly, there is yet another gap, leading directly to an elf standing at the edge of the other side and the finish line consisting of another elf placing a landmine.

Text teaching the player how to fly. 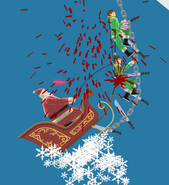 The end.
Add a photo to this gallery
Retrieved from "https://happywheels.fandom.com/wiki/North_Pole_Rush?oldid=87472"
Community content is available under CC-BY-SA unless otherwise noted.