The meteor is a special item that consists of a large sphere with brown coloring and craters. Its diameter can be adjusted from 200 to 600, with the height and width always being equal, due to it being spherical. The meteor is very dense and can crush almost all objects with ease. Meteors are possibly the rarest objects to be found in normal levels due to its huge size. It is the heaviest special item in the game. It is also the largest object currently found in Happy Wheels which is not made using shapes. As the name suggests, the meteor comes from space. It is one of the many items added in the original release of Happy Wheels.

Getting chased by a meteor. 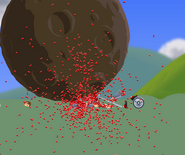 Segway Guy being crushed by a meteor. 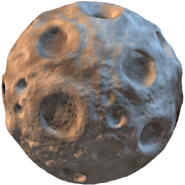 The meteor as shown in the old sequel.
Community content is available under CC-BY-SA unless otherwise noted.
Advertisement