Start a Wiki
MaToBaToo (formerly known as ! ! MaToBatoo ! !) is a featured level by farlaineloco. It currently has over 2,000,000 plays with a 3.47 star rating from over 1,000 votes. Pogostick Man is the forced character.

You begin as a purple blob-like character in a twilight forest. As you move through the level a pink figure shows you where to go, although it can be disabled by activating the "deactivate help" switch upon start.

You proceed over a hill, knocking over a yelping blob creature. You come to a cliff wall, and an elevator with menacing eyes brings you up. Be careful not to touch the cliff wall while on the elevator, or else you will get stuck. You see more of the blob creatures hiding in a bush, and then you go over a bridge. Lightning flashes ahead of you, and you go into a dark tunnel. A jointed branch hurls you upwards, and you fall through a tunnel into a cannon.

The cannon shoots you out of the tunnel, and another jointed branch catches you, allowing you to step into another tunnel. As you continue, a wall comes up in front of you and spikes appear to your left. The boulder above you comes to life, and starts coming toward you after the wall to your right disappears. You run down a hill, trying to escape the boulder, when it rolls beneath your feet and out of view. You keep running onto a bridge, and when you come to the end, the boulder smashes through from below.

You fall through the gap down to another hallway, over a bridge, and across a field of the blob-creatures hatching from leafy pods. The blobs run down a hole, and as you pass them, a giant purple peach falls from above and tries to push you over the cliff to the left. You must push it through the forest and to the cliff wall, which will break and allow you to enter. In the cave is a nest, and when you reach it, you lose your limbs and more eggs of your creature appear, bringing you to the end screen and the victory.

The patch of creatures 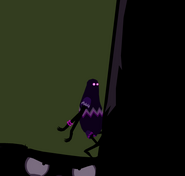 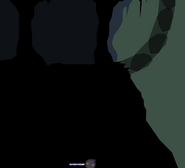 The boulder stuck in the ground.

End screen.
Add a photo to this gallery
Retrieved from "https://happywheels.fandom.com/wiki/MaToBaToo?oldid=84200"
Community content is available under CC-BY-SA unless otherwise noted.