Start a Wiki
The log is one of the three building blocks found in the game. The log is a dark brown rectangle with lighter ends. It was added in V1.0. It is supposed to represent a log of wood or, in some instances, a whole tree that was cut down. The log is not as dense as the i-beam, but it is pretty dense. It can be broken in half when enough force is pushed on the log. Once broken in half, the broken sides will also be lighter. The width can be changed from 36 to 54, with 36 being the default width, while the height can be changed from 200 to 600, with the default height being 400. In the V1.67 update, the log was given a sleeping option.

The log used in the featured level, The Combine 2.1 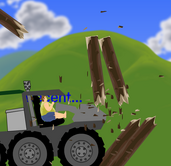 Logs breaking from a big vehicle ramming into them. 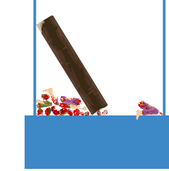 Log particles.
Add a photo to this gallery
Retrieved from "https://happywheels.fandom.com/wiki/Log?oldid=91587"
Community content is available under CC-BY-SA unless otherwise noted.