You start off right in front of a "garbage truck" that will chase you if you touch it or wait a few seconds. If it catches up to you, you will be cut to pieces. Once you move ahead, platforms will come down, they will activate if you touch it or wait long enough. If you fall into the gap, wheels will crush you. If you take too long to get to the next area, a gate will block your path and you'll get killed by the garbage truck, if you successfully make it, the gate blocks the garbage truck from chasing you. Next, there's an elevator-like machine that will bring you down to the next area (it is not needed to get to the next area, but it is safer).

After that, a platform will drop when you touch it, followed by a robot that will chase you. If you touch it, it might fling its arm and you'll get launched and possibly killed. There are some landmines that will launch you up to a spike set on the ceiling. Now, there's an elevator that will start dropping once something touches it. Lastly, the elevator-like machine appears again, but this time, it will bring you up to the next area. Head right and the finish line is there, with a wall that blocks you from proceeding (this level has a sequel called Laboratory 2, which starts right where you finish in Laboratory 1).

Getting crushed by the wheels. 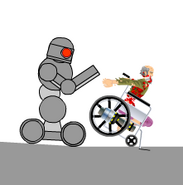 A split second after the robot kills you.
Add a photo to this gallery
Retrieved from "https://happywheels.fandom.com/wiki/Laboratory_1?oldid=89329"
Community content is available under CC-BY-SA unless otherwise noted.