Start a Wiki
LIMBO 2 is a featured level by iDeViL360. It currently has over 3,500,000 plays, and a rating of 4.02 from over 10,000 votes. This level is a sequel to LIMBO, which features the same concept. The level appears to mimic the game, LIMBO. Like in the game, the entire level is in black and white. Segway Guy is the forced character.

You start out in a dark black-and-white cave, the scene much like that of the video game. You exit the cave, go down a hill, and cross a stream. Reaching the other bank, you go up a hill and jump over a pit of spikes. You go under a giant spider, who tries to smash you with its leg. You come to a hole in the ground which you must enter; otherwise, you will enter a dark cave and be impaled by spikes, with words on the edge of the screen saying "Wrong way..." Down the hole, you come to a hallway in what seems like an abandoned factory of some sort. The secret finish is located here: If you back up the tunnel that led you down to the hallway, you'll go through the floor to the secret hallway. Two large rotating cogs will be blocking your path, so you must either eject or enter them carefully to gain access to the secret finish.

If you just continue on down the factory hallway, some debris falls from the ceiling, and you pass by 2 machine presses and a falling gear, which try to crush you. As you continue, you come to a slowly rotating cog which you must ride down to the bottom, taking care not to be killed by the quickly rotating gear below. You proceed down that hallway, and into a tunnel filled with light, taking you to the victory.

About to enter the hole.

About to get crushed. 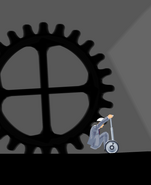 At the two large gears.

At the secret finish.

The victory screen
Add a photo to this gallery
Retrieved from "https://happywheels.fandom.com/wiki/LIMBO_2?oldid=76642"
Community content is available under CC-BY-SA unless otherwise noted.