Start a Wiki
L.A. Noire BnW FIX is a featured level by PhysX. It currently has over 3,500,000 plays, and a rating of 3.30 from over 10,000 votes. You are on a state trip, strolling around in a black and white city. Irresponsible Dad is the forced character.

You begin in front of a 1950s diner called 'Mick' with a man smoking to the right, and a car driving by in front of you, everything being black and white. You pass a billboard advertising cigarettes and go over a ramp as the car that passed you rear-ends another car. If you have some speed, you will go up a ramp on the stairs attached to the buildings. Some parts of the stairs are interactive while other parts are not. If you continue on below, you pass the fire escape stairs and over two boxes. You pass another building, and you go over a mailing box and afterwards, you pass a parking booth, and you come upon a street.

As the crossing sign changes, you cross a street and ride over a bench with a man looking to his left. You need to get over the bench, but not the man. You pass a few buildings, go over a ramp and another bench. Just as before, if you have speed, you will be able to go on the interactive fire escape stairs on the buildings. You then get to the end of the buildings, and you then cross over the fence to the edge of a cliff. Above you is an advertisement for "LUCKEY STRIKE CIGARETTES".

If you have enough momentum, you break through a glass panel by a stairwell and continue on the ledge. At the end of the building you break through more glass panels, leading you to fall between two buildings down to another street. You then go forward, and you get to the finish line which leads to the victory.

About to cross the street.

Going over the cliff and through the glass. 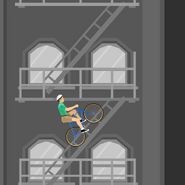 The victory
Add a photo to this gallery
Retrieved from "https://happywheels.fandom.com/wiki/L.A._Noire_BnW_FIX?oldid=85977"
Community content is available under CC-BY-SA unless otherwise noted.