The joint tool is a mechanical joint used to attach objects together on a pivot as a pin joint or on a single sliding axis as a sliding joint in the level editor. In the editor, pin joints appear as orange circles with two arrows around it, pointing in opposite directions. The sliding joint appears as two orange arrows both pointing in opposite directions. The player can either joint two objects together or to the background. If jointed to the background, the object will stay in place and rotate or slide around the joint.

To place a joint, the player must place either 1 or 2 unfixed objects together, and place it where one of the objects overlays the other one. The player can then move it anywhere, and an orange line will stick from the joint to the jointed objects. Where ever the pin joint is placed, the objects will rotate around it there. For example, the player can look at the pin joint like a star and the jointed objects are the planets. The objects rotate around it. An orange dotted line will show where a sliding joint will move once one is placed down.

Motors can be selected on joints which makes them rotate without the need for applied force.

Added in the v1.79 update, sliding joints allow an object to slide from one location to another, in a total of two directions. This type of joint allows for the easy creation of mechanics such as elevators and moving platforms. The "axis angle" determines the angle an object will move in degrees. For example, and axis of 0 will have the object move horizontally, whereas an axis of 45 will place have the object slide on a 45 degree angle. A sliding joint can have its allowed movement distance adjusted, and can also have a motor like the regular pin joint.

2 in one. NPC punching and NPC getting crushed into pieces by the strong punch.

NPC explodes in touch, due to massive Motor Torque and Speed. 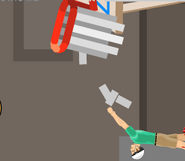 A Pin Joint glitch where items are pin jointed together, but they somehow come apart. Notice how the character's joints are glitching out.

Elevators are now very easy to make using the sliding joint. Here is an example of a simple working elevator. 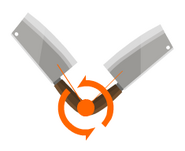 2 cleavers pinned together to create a custom weapon called a chomper.

The old vs current pin joint icon for the tool bar in the Level Editor.
Add a photo to this gallery

Retrieved from "https://happywheels.fandom.com/wiki/Joint_Tool?oldid=89762"
Community content is available under CC-BY-SA unless otherwise noted.