Start a Wiki
A hazard is an object intended to cause harm to the player. They are usually placed in levels to increase challenge, fun, or simply for humor. Hazards are found in the special items category of the level editor and are designed to kill very easily.

The arrow gun is very similar to the harpoon gun. It has a gray, metallic -possibly concrete- base, but smaller and with a crossbow-firing device mounted onto it. It does not kill the player immediately, but it can slow him/her down if there are too many. It can only kill the player if hit in the center of the skull, although this is not always the case. You can set "rate of fire" from one to ten. You can also set it if you want it to be fixed or unfixed. This feature is very useful on vehicles. When an arrow gun is attached to a vehicle with a pin joint, it will shoot unlimited arrows. One gun can only fire 10 arrows, then it will stop. It was released on September 16th, 2011, v1.47 along with the chain, an option was added to not shoot the player.

The harpoon gun is a hazard with a grey, metallic, possibly concrete base with a harpoon-firing device mounted onto it. It targets characters, and fires when you get close enough. A harpoon to the head instantly kills you, even if it doesn't decapitate your character. You can toggle "anchor" on and off. Anchoring determines whether the harpoon remains attached to the base with a rope when fired, or whether it simply flies free of the base. Each harpoon gun can only fire a single harpoon. The harpoon gun has been available as of version 1.30 of Happy Wheels.

The homing mine is a gray, spherical object with a circular "eye" in the center. It floats with a jet similar to a smaller version of Wheelchair Guy's rocket. Its eye turns green within the presence of a character, and when a character comes near the homing mine, its eye turns red and it slowly floats towards the character. It explodes on contact with the character in a way similar to the landmine, disappearing completely after a single use. Though, as of version 1.43, it has a different explosion animation than the landmine. The homing mine also comes with a speed setting; the mine can become very fast or be quite slow. There is also a time delay setting, allowing the mine to hold off before exploding when it reaches the player (when it touches the player, the mine's eye will flash yellow and beep until it explodes).

The landmine is a small, thin object which causes an explosion when its red button is touched. The explosion can easily kill a character when it occurs close to them, and may also sent them flying offscreen. Although it is a particularly deadly hazard, the landmine is not considered to be very threatening due to its easily-avoidable size and the fact that it disappears after it is used once, unlike other hazards.

The spike set is one of the more common hazards. When a player falls onto the spikes, they get stuck or gored. If a character's head touches a spike, much like with the harpoon, they are instantly killed. You can determine how many spikes the set has (from 20 to 150) or whether it is fixed or not. The spike set is capable of being jointed to other objects, which is unusual for hazards.

The wrecking ball is a giant black ball swinging on a rope that causes a huge force to be exerted upon objects it touches. It passes through interactive fixed objects with no noticeable change in velocity. The length of the wrecking ball's rope can be altered. Try to avoid the wrecking ball, because it will often kill you instantly. Wrecking balls are often used in "Don't Move" levels, where the player is effortlessly pushed throughout the level without dying using wrecking balls. 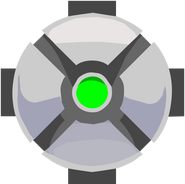 The Moped Couple man with multiple arrows in him.

The Homing Mine in action.

The Landmine.
Add a photo to this gallery
Retrieved from "https://happywheels.fandom.com/wiki/Hazards?oldid=89101"
Community content is available under CC-BY-SA unless otherwise noted.