The Happy Wheels Mobile app is the official mobile version port of Happy Wheels for the iOS[1] and Android[2] operating systems. The iOS app was first shown at PAX East 2013. It's release date was first scheduled for the summer of 2013, but was delayed several times, eventually being released on August 19th, 2015.

Development on the Android app started immediately after the release of the iOS app. In late 2019, Jason announced on the Happy Wheels Official Discord server that anyone may sign up to beta test the Android app. After a beta period of a couple of months, it was finally released on January 25th 2020.

Jim and Jason originally planned the game to require payment in order to download: $1.99 within the first week after publication and $2.99 after that same week has passed. Instead, the game is free to download on the App Store with ads included. People can pay $1.99 (iOS or Android) to permanently remove ads. The game most likely cost money before because Jim and Jason did not find an ad system for the game yet and still had to make money.

Gameplay is mostly the same as the original game. The main difference is the controls. Because iOS devices and other devices use the touch-screen to navigate and don't have keyboards, the character is controlled via on-screen buttons. Another difference from the original game is that a timer is shown on top of the screen. The app supports Game Center, and will later support iCade controllers.

The game runs at 60 frames per second, unlike the online version which runs at around 30 frames per second. A new addition exclusive to the app is the "slow motion" feature. This feature slows down time for a brief moment, and the frame rate will not drop when playing in slow motion.

When you select the app, you are taken to the homescreen of the game. On it, you will see the logo of Happy Wheels, as well as a character next to it. There are also grey clouds in the background, but unlike in the browser version, they do not move. There are five buttons you can choose from. The first (and most noticeable) one is a blue "PLAY" button. Selecting it will direct you to a chapter of a character. Below this button are four other buttons:

The game at launch included only one main character, Business Guy (known as Segway Guy in the browser version) with 15 levels made specifically for him. Wheelchair Guy, Irresponsible Dad, Effective Shopper, and Moped Couple were also available, but could only be played in the level editor or the "All Characters" chapter. In the following updates, more levels were added for the other characters, although this process has not been finished yet. Later on, Pogostick Man was also added in, but only the Android port includes levels for him. All of these levels can be played without an Internet connection, unlike the browser version which is only available through Internet access.

The iOS version is compatible with the following Apple products:

The Android version is recommended for Android 4.1 and up.

In response to a tweet regarding controller support, Fancy Force responded with "I will add support for the iOS game controllers. It currently supports iCade's 8-Bitty controller (sadly out of stock now). However, in Version 1.0.1, Controller Support has officially been added in to the game. (Only works in Gameplay right now)"[3]

The Android version started development after the iOS app. After a short beta period, it was released on January 25, 2020. Unlike the iOS version, it currently lacks a level editor.

Geek Insider has interviewed Jim and Jason here. In the interview, Jason explains converting flash to iOS as "It has been very difficult. Putting aside things like developing touch controls and the physical limitations of mobile devices, simultaneously converting and updating the code as well as converting the assets from Flash has been a big undertaking. And like all other projects, a million other unexpected issues have come up."

Jason also describes the success of the mobile app being "The mobile space looks rife with opportunity. However, there is a saturation of 2D racing games currently in the app store. Plus, the casual gaming community is becoming more and more used to using one finger to play games. That said, I think our game is unique enough to attract new fans in addition to those who migrate from the online game. In other words, I see it being very popular."

A question was also asked about his opinion about paid vs free app models, Jason replies "Consumables–items that can be bought and then used up–annoy me, specifically in-game currencies (be it coins, berries, donuts, etc.) which are required to achieve certain goals that can’t otherwise be done through game play. It obscures the actual cost of a game. It’s great for capitalism, but it often seems unfair. The freemium model doesn’t bother me when the cost to value ratio is very clear. And because of competition, many developers will over-deliver free content. To some extent, it balances out the effect of the money vampire apps."

The initial version of the Happy Wheels app received positive reviews according to the user reviews in the App Store. Despite the positive reception, some less positive reviews criticized the very limited content (i.e. being able to play as only one character with 15 levels available), the levels' difficulty being too high, some problems with the on-screen controller, and a few bugs in the Level Editor. Later on, the violence that is included in the app was reviewed as being too "realistic", which subsequently caused the age rating to be changed from 12+ to 17+. This also caused the app to be banned from the Brazilian App Store.

The App Store also objected to being able to injure Irresponsible Dad's child, so Fancy Force decided to disable injury to the child, which meant that any attempt at destroying the child was impossible, and the child would still stay intact (however, he can still "die" as Irresponsible Dad will still yell "Dammit!"). This restriction was also applied to the Android version upon release. Because of what happened, Fancy Force implemented the option to remove blood/gore from all characters.

A preview of what the game looks like on an iPad's retina display.

What the main menu looked like when the iOS version was released (PC).

The main menu on the browser game after the Android release.

How Happy Wheels originally looked like before its release.

When you unlock an all characters level you are prompted with this message.

The message you get after paying to have ads removed. 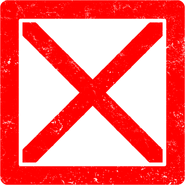 When completing all levels for a character, the Stamp of Success will temporarily show on a character's head.

This banner will occasionally show in place of an ad.

When you complete a chapter, the character's face is crossed off temporarily.

The Mobile app thumbnail. it has Irresponsible dad's head on it.