The Happy Wheels Discord server was created by Jim Bonacci on the 25th of September 2017. It currently has over 100,000+ active members, 12 public channels, and 2 voice channels.

This is a list containing important users of the server such as the owner, and moderation team.

Several of the server's emojis.

The amount of coins awarded after reaching the following levels. 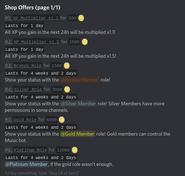 The shop offers list that appears when you type "!shop" in #bot-commands.
Add a photo to this gallery
Retrieved from "https://happywheels.fandom.com/wiki/Happy_Wheels_Discord?oldid=91724"
Community content is available under CC-BY-SA unless otherwise noted.