The Happy Wheels HTML5/Javascript Remake is an official remake of the original Flash-based Happy Wheels game. The remake is intended to keep the original game alive after the deprecation of Adobe Flash. For the sake of preservation however, it has been expressed that the original Flash version will still be accessible here, provided one has the means to access it.

Additionally, a test version can be found here.

The Happy Wheels JavaScript Remake was developed in HTML5 and Javascript, which will allow it to not only run smoother, but run in 60 frames per second. Unlike the original, it was not developed by Jim Bonacci, instead outsourced to Goodboy Digital, a London-based Digital-play development company.

Initial closed Beta testing started in late October 2020 through the official Discord and ended by December 28th 2020 with the first public version released by that date.[1]

The game plays like the original, with a fairly faithful port of the box2D engine to replicate it as closely as possible. 60 frames per second support and much smoother gameplay are improvements over the original. But, for some devices, the game will run at 30 frames per second, which is the highest one for those.

Featured levels will be ported over and be playable in the remake, as will all other levels in the database, published or not. However, as a result of the migration to Javascript, all replays are thereby rendered inaccurate across all systems. Do note in initial open beta, Happy Green Hills is not playable as the level itself was created within Flash itself. It is anticipated that this will be resolved in subsequent patches.

With the release of the JS version, flavour text, some of them rather tongue-in-cheek, can be seen on the homescreen. The identity of the perpetrator remains unknown, but displayed here are the nine variations of their handiwork.

Does Jim know I wrote this here?

With the new remake, text appears while a level is loading. There are 4 different messages that can appear when you click on a level to play it, and 3 others if you restart a level: 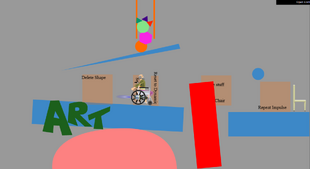 A screenshot of the HTML5 remake's early progress, circa 15th June 2019.

Early iterations of the Level Editor, circa 26 August 2019. 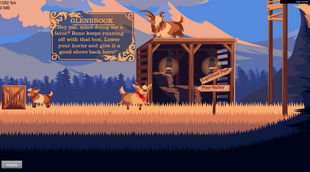 Testing Godwin the Goat in the JS port, circa 7 April 2020. Take note of absurd fps value.

https://streamable.com/x0ram An early look at the remake, circa 7 March 2019.

https://streamable.com/90gy0 Another video on the remake, showing debug controls, circa 15 April 2019.