Start a Wiki
Happy Green Hills is the very first level for Happy Wheels, made by Jim Bonacci. It currently has over 26 million plays, and a rating of 4.18 stars from more than 39,000 votes. It is the only level not made using the level editor as it was digitally hand-drawn by Jim. The level lends its name to the "Green Hills" background. It was finished in 2006, being the first and only level made for the game back then, and was officially released in 2008. The level puts you in a calm, hillside landscape. You can play as any character.

The player begins on a flat, grassy surface in front of a landmine. Not too far away is a small hill and a cave.

By the entrance of the cave is a slope. Then there is a log bridge and a large gear followed by two rocky platforms that can be used as a shortcut. Next is another gear with less and smaller teeth and three rocky elevators leading to the exit of the cave where the two paths join.

The top of the cave contains a lot of blocky stones. There is a steep upward slope leading to ruins with a small, breakable stone wall. Past the ruins is a downward slope and the other side of the cave where the two paths meet.

After The Cave's Exit

There is a few ramps with steep pits and a couple of smaller caves, leading directly to the finish line, a stack of checkered blocks.

The beginning of the level.

The first hill immediately after the beginning.

The entrance to the cave. Going above instead will take the player a different route.

The first gear platform. The player can either ride across the platforms as seen to the right, or go along the bottom.

The second gear platform, as seen from the bottom path.

The exit to the cave. The above-ground path also links to this decline.

Missing the jump results in falling into a deep pit.

Landing at the bottom of the pit will usually result in death.

A second, smaller gap follows immediately after the first. Falling in leads to the same pit.

Traversing under the rocks. The player can also go on top.

The final hills before the finish.

Rather than going in the cave, the player can go above through a different path.

Passing over the rocks leads to a small rocky decline.

Rocky stairs, which lead inside a structure. The blocks on the right can be knocked over.

The interior of the structure.

The steep decline links up to the decline after the cave exit, joining back into one path.

The tower of blocks on top of the ruins.

The rocky elevators without their textures.

The tower blocks without their textures.

The collisions for Happy Green Hills are handled by basic shapes. 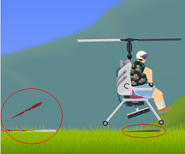 Performing the Helicopter Man magnet glitch often results in the level crashing to this screen.

The clouds when "compressed textures" is selected. Notice how the clouds at the far left have disappeared.

The strange circular cloud design at the far right appears when "compressed textures" is selected. 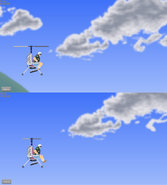 A sequel to the level, under the title level2 and also using custom-made objects, was in the works at some point, but was cancelled shortly after. The slideshow below displays all the custom objects made for the level. This sequel can be found here.

1 of 7
Add photo
Retrieved from "https://happywheels.fandom.com/wiki/Happy_Green_Hills?oldid=91528"
Community content is available under CC-BY-SA unless otherwise noted.