Start a Wiki
In 2006, Jim Bonacci started thinking about his next game. He made several demos for possible games. This game, called GameTest12, is one of these demos. Jim mentioned it in a news post on his main page. It was released to the TotalJerkFace Community by TheDemonicElephant on July 27th, 2011 at 8:03 PM EST via the Forums. Jim said he will not finish the game, and it is just a demo.

You can play the demo here.On 25th September 2017 Jim released an .swf file of the test via a Discord chat, though it contains minor changes such as a reset button, as well as the text having a different font. You can play it through a Standalone Flash Player or certain browsers (Internet Explorer and Mozilla Firefox).

In the game demo, you play as a young fighter wearing a blue suit, ready for action. Your enemy (a man similar to the main character in Jim's old animation Where's My Bike?) is there for you to pummel him into a bloody pulp. He does not attack, for this is just a demo, and Jim never got around to programming him to attack. When you start the game, he automatically walks up you, but doesn't do anything. You can attack him by pressing a set of buttons. The W key punches, the E key kicks, and the R key instantly gives you a bat. You move with all four of the arrow keys. You can double tap left or right to dash. Several moves are depicted on the side of the game. Some moves will perform a fatality to the enemy, but most of which are done at low health.

There are only 2 weapons in this demo. You can pick up a weapon with W.

Screenshot of the game; the character is seen executing a trick.

All of the controls. 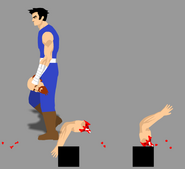 Holding the opponents head with both of his arms on the floor.

The duo duplication glitch from the latest build
Add a photo to this gallery
Retrieved from "https://happywheels.fandom.com/wiki/GameTest12?oldid=89345"
Community content is available under CC-BY-SA unless otherwise noted.