FireNine09 is a well known user who joined total jerkface on December 31, 2011, who according to his Profile Page, lives in Canada. He is known for his four featured levels. It was thought that FireNine09 was Jim's favorite author, as it is rare for a user to have so many featured levels in the short amount of time that he got them featured in. His most popular level is WIPEOUT, at 20,000,000 plays. Pokemon Adventure and Super Mario 64 are both at around six million plays. It is likely that he has retired from Happy Wheels, as his most recent level is WIPEOUT, published in March 2012.

* This level is featured twice, one is the original, while the other is the fixed version, both share the same name. 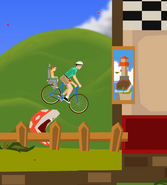 Super Mario 64.
Add a photo to this gallery
Retrieved from "https://happywheels.fandom.com/wiki/FireNine09?oldid=91588"
Community content is available under CC-BY-SA unless otherwise noted.