Start a Wiki
The fan is a movement item found in the level editor. Like any ordinary fan, it blows objects in whatever direction it faces. It has enough force to tear some characters apart at its base. Its appearance is a large, industrial fan, and has 3 blades. If you move close enough to it, you can hear and see its blades spinning. The fan's only toggle is the rotation, but as with boosts, the power is increased when they are piled on top of each other.

What happens when 6 fans smash the main character & 2 NPCs 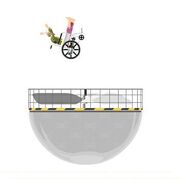 A fan blowing Wheelchair Guy into the air.
Add a photo to this gallery
Retrieved from "https://happywheels.fandom.com/wiki/Fan?oldid=89461"
Community content is available under CC-BY-SA unless otherwise noted.