Explosives are, as the name suggests, explosive items available in the level editor of the game.

The most common use for explosives are as hazardous obstacles in a level, due to their highly fatal explosions which can tear a character into pieces. The two explosives provided are landmines and homing mines. Landmines were included in the original release, whereas homing mines were introduced at a later time.

The landmine is one of the six hazards in Happy Wheels. It is also one of the original hazards, besides the spike set and wrecking ball.

It is a small, thin, grey colored slit with a flashing light in the middle of it. Most of its body is a dark grey, but it is light grey at the top. It has a flashing red button, which flashes on and off. The landmine explodes when the button is pressed.

When it explodes, it can either kill a character by blowing them to pieces or by launching them in some direction. It might also make them just fly in the air a little bit, along with minor injuries.

There are no special features that can be toggled for this item in the level editor. Users can only determine the rotation of the landmine.

Despite it being a particularly deadly hazard, it is not usually considered threatening. Due to its size and single usage, it is easily avoidable. However, it can be hard to notice due to this. It also can be picked up and thrown, although it can be hard due to its small size and the button that can blow up the player.

The homing mine is one of the six hazards in Happy Wheels. It is one of the two explosives and was introduced in v1.42 on July 8th, 2011. It was added along with the toilet and trash can.

The homing mine is a grey, octagonal object with a light in the center. It floats with a small jet.

The light changes color depending on the current action. When idle and detects no character, it will be off. When a character comes within range, it will turn red and float toward the character. When it touches a character, it will explode instantly. If there is a delay timer, the light will flash yellow and emit a constant beeping sound. It will continue this action for however long the mine's delay timer has to be set to before exploding and therefore destroying itself. If the homing mine detects a character but its path is obstructed, the light will become green.

The homing mine has two toggles. A user can determine how fast the mine will accelerate and float toward a character (1-10). There is also a time delay setting (0-5), allowing the mine to hold off before exploding when reaching a character.

This item can be thrown around, but only if there is a delay. 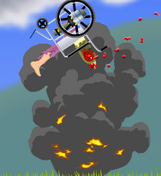 Being hit by a landmine on Happy Green Hills.

The homing mine exploding. 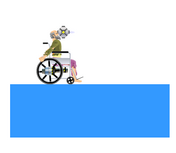 The homing mine with time delay.

The 4 stages of a homing mine.

The homing mine in flight.

The homing mine explosion animation.