Death is one of the core aspects of Happy Wheels; given the over-the-top nature of the game, it happens quite easily and is usually bloody, especially if it involves traps.

Death happens when players sustain too heavy damages (see below); controlling the protagonist becomes (obviously) impossible once dead, but it is still possible to set off special Triggers or in some cases take coins. Death can come quite easily as losing limbs or entire parts of the body is rather easy in the Happy Wheel's universe. Dead characters are generally far more flexible than their alive counterparts and will be able to rest in poses a breathing character would probably not be comfortable being in without being forced to.

It is also impossible to win a level if the playable character (or, in case of duo/trios, the main one) falls on the finish line dead, even if the character lies intact on it. Don't forget that the character does not have to be alive to win when activating a victory trigger, though such levels are usually rare and the trigger is hard to reach.

Unlike in most games, the level will not automatically end when the main character dies, instead, the player must select the "exit game" option in the pause menu. This allows the player to experience with the ragdoll (which is an essential part of the game's experience) or even to win in case of a victory trigger (as mentioned above).

There are three main causes of death: pelvis loss (character torn in half), in which case the character bleeds out and dies in about five seconds; any injuries sustained at the cranium by a sharp object (arrows need to deeply penetrate the skull to kill the character), which is instant death; and neck breaking, which is also instant death.

NPCs are more resilient and will live even if they are torn in half; however, an injury to the cranium will also instantly kill them. In order to fight off an aggressive NPC, a player should then focus on said NPC's head.

Hazards are the most common ways of dying.

Harpoons will usually instantly kill the player character if they are shot from above and successfully land on the character (which happens if the latter is too close to the harpoon or not fast enough to swiftly avoid it); also, a horizontal harpoon may touch and rip a fast-moving character in half (due to the sudden loss of velocity), thus causing death in a few seconds.

Wrecking balls usually instantly rip a character to shreds along with their vehicle in case of contact. In rare cases, a ball at the right height might decapitate a character without touching the body, resulting in the dead character still moving as if nothing happened.

Mines and homing mines are particularly deadly, though landmines are passive traps that can be quite easily avoided with most characters (unless they're without vehicles, or if there's a row of them). A direct hit (such as attempting to hold a mine with the hand) with a mine will usually result in the character's total annihilation, and can cause body parts to fly across the map. This includes fat characters such as Santa Claus that are usually more resilient to explosions.

Spikes will kill any character whose head fall through it. Also, a spike might cut a character in half if said character falls on it at a high speed, which happens a lot in Spike Fall games.

Arrow guns are the less threatening hazards but will occasionally one-shot their victims, especially if they aim at the head (which is likely for arrow guns mounted on ceilings). Arrow guns that shoot at a quick pace are noticeably deadlier than their slower counterparts. Traveling fast while being shot also increases manyfold the risk of death.

After hazards, blades are the second main cause of death. It is sometimes quite difficult to avoid touching blades, especially if they are hold by NPCs; a head touch will instantly kill the character. However, even if a blade is stuck in the body, it can be deadly, because blades stuck through the torso cause so much pressure that it tears the character in half, thus leading to death in a few seconds. This especially happens if both sides of the character are pulling away from the weapon, which rips the intestines open in a dozen seconds or so.

Crushed by a heavy object

Heavy objects such as meteors or heavy vans may crush a character to death; in which case, the death is almost instantaneous and the victim is reduced to a scattering of body parts. Some smaller vehicles such as the lawnmower or Santa Claus's sled may also crush some characters to death (especially infants), but have to fall on them to cause this effect.

A sudden and severe change in velocity will usually cause the character to explode, or at least be cut in half. This includes falling on solid ground from a great height (the fall has to last at least three to four seconds to truly be deadly) or smashing against a wall. Colliding with fixed/very heavy objects or the level boundaries can result in the character exploding.

Being too fast can harm or even directly kill the character (via decapitation or head explosion). This specifically regards Effective Shopper who loses her head even at relatively moderate velocities. Irresponsible Dad is prone to splitting in half when moving his bike too fast, however this is a rare occurrence.

Lawnmower Man and Helicopter Man are the only characters whose vehicles can cause death on purpose, apart from crushing other characters. The lawnmower can shred people up and might leave some body parts lying around, while the helicopter can cut and stab people with its propellers. Other vehicles can cause death, but only when a character gets their head crushed; when they end up being stuck upside-down (which is noticeable with Moped Couple); or when they crush an NPC after falling a long way. Some heavier vehicles can also crush the chest by simply driving over it.

Neck breaking is common when a character is upside down in their vehicle, such as with Irresponsible Dad, Effective Shopper, Lawnmower Man, and Irresponsible Mom. Pogostick Man seems to be the least likely to break his neck, though it can happen in case of a bad fall.

Falling to the bottom of the map

When a character falls from the bottom of the screen, they are not actually dead yet, but they simply become fixed and non-collidable, as if they had fallen into a giant hole in the ground. This is proven with Helicopter Man. If the magnet or the helicopter goes down the bottom of the level but flies back up, the magnet (and anything attached to it), the helicopter, or parts of Helicopter Man will have no collision. Turning off the magnet or ejecting will make some items fixed.

The game's floor boundaries have an invisible collision further down from the camera's view. This can be seen by playing Happy Green Hills as Irresponsible Dad or Irresponsible Mom and dropping one of their children under the log bridge in the cave. Sometimes, there is blood spurting on the map after you fall. 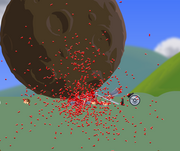 Segway Guy and his vehicle destroyed by a Meteor item. 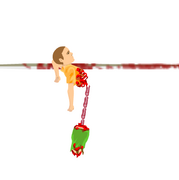 As shown here, Irresponsible Dad's son has been killed by a blade object and torn in half. 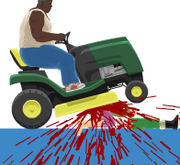 Helicopter man's dead body falling with his spine hanging out. 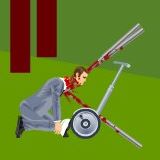