You are almost to the water supply, but your path is still invaded with zombies. There is an armory room where you will grab a gun and use it to shoot down zombies. There are two zombies that you will shoot in the head when you get close enough, a zombie standing on top of a table that will fall off and start crawling towards you when you shoot its legs, (however, this does not obstruct your path), and a zombie that you will shoot down off the stairs. When you reach the fifth zombie and shoot it, it will not just fall down like usual. Instead, its stomach is shot. Move close to it again to shoot its head and knock the zombie down. Now, a zombie is guarding the water supply. Shoot it to gain access to it. The door will unlock and open. After the door opens completely, you will touch a hidden finish line that is located near the door. 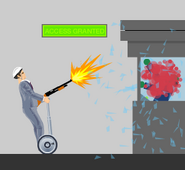 The end.
Add a photo to this gallery
Retrieved from "https://happywheels.fandom.com/wiki/Dawn_of_the_Dead.lv7?oldid=88355"
Community content is available under CC-BY-SA unless otherwise noted.