You start "inside" a building. A "zombie" is guarding the window where you must advance to. If you go left instead and try to open the door, a zombie will crush you. Fortunately, there is C4 in the suitcase (as described in the author's comments) that will explode after you press the button near you. The explosion will blow up the zombie and the window, giving you a safer path.

You will drop down into another building with a balcony. Now, you must jump out of the building and onto another. A zombie will break through the wall and chase you, so you must evade. When you jump off of the building, quickly eject and grab on the "ladder" held by the helicopter that will start flying away from the building. It will soon reach the last building, which contains finish lines for you to land on after letting go of the ladder. 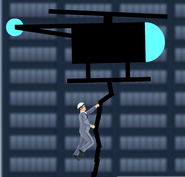 The end.
Add a photo to this gallery
Retrieved from "https://happywheels.fandom.com/wiki/Dawn_of_the_Dead.lv1?oldid=86193"
Community content is available under CC-BY-SA unless otherwise noted.