First, you will drop down from a tube that you used to finish the previous level in the series, Dawn of the Dead.lv5. You will land and crush a table full of chemistry materials. There is a chalkboard, and on the chalkboard is a number that will be helpful later in the level. Now, there is a voltage sign, warning you that you may get electrocuted. You must jump over the "bridge of electricity" or you will be "electrocuted". When you reach the elevator, you will see that someone has already taken it. He gives you the middle finger, then the elevator rises. The ground will open and you will fall. A hidden fan will blow you to the left wall, making you land on the curve, making your landing more safe.

As you touch the red "laser", the ball above will start rolling fast. You must reach the end before it pushes the button, which will close the path and trap you. During your "race", there is a bumpy floor, blocks that will slightly block your path, a treadmill that will slow down your speed, and bottomless gaps. If you don't jump over the last gap in time, the ball will push the button and the door will close and block your path. The door contains a barely noticeable spike set.

Next, there is a ladder that you will climb (with the help of the boost), followed by a fan that will push you to the next area. If you go left and push the button, a zombie will pop up and possibly kill you. If you go right, there are 9 number buttons with each of them in numerical order (1-9). If you remember the number on the chalkboard, enter the code by pushing the same buttons. They MUST be pushed in that order or the code will be incorrect. If you input the correct code, the door will open and the finish line is right there.

At the ladder area, if you remove the segway out of the way from the hole somehow, you can crawl into it and access the secret area. If you enter the secret area, there will be a rope swing. When you swing and land on the red platform, there is text below that says "6664UMK PM ME THIS CODE". Doolie would then make a short level for the first people to PM him. Unfortunately as said by doolie himself, he was too lazy to do so. 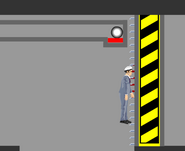 The end.
Add a photo to this gallery
Retrieved from "https://happywheels.fandom.com/wiki/Dawn_of_the_Dead.Lv6?oldid=75919"
Community content is available under CC-BY-SA unless otherwise noted.