Start a Wiki
DC metro station is a featured level by MetallicDoom15. It currently has over 15,000,000 plays, and a rating of 4.23 from over 23,000 votes. Irresponsible Dad is the forced character.

You start near the entrance to the "Dupont circle station", there is an escalator that you will ride down, which will lead to the ticket machine. You will take the ticket and crash through the Help Station, breaking the glass panels and knocking down Segway Guy. Then there are stairs that will lead to the train, you will break through the glass and enter the train. As you ride it, you can break through more glass and enter more passenger cars, with the last car containing Effective Shopper controlling the train, but you will need to do that when the train reaches the end anyway. The train will move out of the tunnel, and, after a bit, will drive into another tunnel and stop near the end. When the train stops, you can now exit the train and reach the finish line. 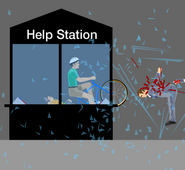 The end.
Add a photo to this gallery
Retrieved from "https://happywheels.fandom.com/wiki/DC_metro_station?oldid=89330"
Community content is available under CC-BY-SA unless otherwise noted.