Start a Wiki
Cursed Mountain is a featured level by kirbypwnage. It currently has over three million plays, and a rating of 3.48 from over 1,000 votes. Segway Guy is the forced character.

You begin in a snowy scene with mountains in the background, and an elf NPC to your right says "Oh hi! Welcome to Santa's new elf camp! Let me show you around." You then proceed past him to a succession of elves giving trivial information about the camp. You then must jump over a hole in the snow, otherwise you will fall into a cave in which you will be stabbed by spears. After clearing the pit, an elf says "We are here!" and you enter a workshop where elves are working on presents. Suddenly, the blank wall breaks and an image of Santa Jim from the Total Jerkface website appears, saying "I could kill you in an instant." The image becomes demonic and the elves shriek in terror as you exit the shop. You pass by an elf frozen in ice, and an unfrozen elf comments "He [Santa Jim] is freezing us to death!" If you stand there a bit longer, an ice beam will come down from the sky and freeze the elf.

You then have two ways to proceed. The first way is down a hole in the ice to an ice cave. The second way is over the hole and through a brown cave, which brings you down to the ice cave. The Santa Jim image will appear again, saying "Oh my gosh." A bunch of ice rocks will fall through the ice cave entrance above, and you will have to dodge them by exiting the cave to the right. You pass a group of elves advising you to find a way out, and then come over a glass panel leading into an ice cave. A multitude of Irresponsible Baby NPCs dressed as elves will appear to the right of the entrance, and if you don't enter the cave, you will be taken to a red screen where the demonic Santa Jim appears quickly, and after disappearing will reveal your character having been mutilated.

In the ice cave, you have two directions to go. To the right you must jump over a pit of ice spikes, then fall down to another hallway and navigate back and forth until you reach the pit leading down to the victory (there will be a Wheelchair Guy NPC to the right holding a bottle.) To the left you jump over an ice log and come to a bigfoot frozen in ice, which you fall past, and then after proceeding down the cave to the right you will come to a third Santa Jim image saying "You are my new best friend." You will then hear ice breaking in the distance and the bigfoot will start chasing you until you reach the entrance to the victory. You must break the glass covering the entrance, and then you will fall onto a sleigh with elves saying "Lets get out of here!", triggering the victory.

Beginning of the level.

The deadly ice cave before the workshop. Notice the Triforce on the rock.

Santa Jim before he causes an avalanche. 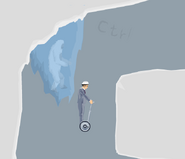 Frozen bigfoot before being released by Santa Jim.

The escape sleigh.
Add a photo to this gallery
Retrieved from "https://happywheels.fandom.com/wiki/Cursed_Mountain?oldid=86802"
Community content is available under CC-BY-SA unless otherwise noted.