Start a Wiki
Chaos City is a featured level by kirbypwnage. It currently has over 44 million plays, and a 4.20 star rating from more than 17,000 votes. You can play as any character.

You start off right next to a circus tent and near some uninteractive trash cans. As you move go forward, an ostrich breaks free and chases you. Just ahead is Effective Shopper, lying down saying that she's too fat, tired or depressed to run from it. Irresponsible Mom grabs her children's arms and runs for it. They will then push Wheelchair Guy and break the fence, making them fall off and land into a pit. The ostrich will also fall in.

If you are fast enough, you will break the glass window while entering the building. Otherwise, you'll fall into the pit. When you reach the other glass panel ahead, the glass will break and land on a table. Segway Guy is attempting to hang himself due to the money market graph showing that he's not doing so well. You enter a restroom that Effective Shopper is in. If something touches her, she'll overflow the toilet. Head right to open the door and knock Moped Guy out of the way. As you go outside, you'll land on a wire that's connected to a telephone pole. Head left to continue on and fall down. Segway Guy is holding his briefcase while he's walking. Moped Girl is working on a computer.

As you move on, you'll head outside and ride a ramp and a fake wrecking ball will fall on the van right next to the ramp. Moped Guy is sitting on a custom made van saying "I'm a jerk!". After that, Explorer Guy is chasing Moped Girl attempting to kill her. Both people trip on a trash bag.

Next, Pogostick Man gets sucked up by a UFO that appears out of nowhere, which then disappears after he gets sucked up. Now, a meteor is crushing Irresponsible Dad's son while Irresponsible Dad is watching, doing absolutely nothing about it, who then yells, "damn it". If you move ahead, a meteor storm occurs. Two meteors crash on the pavement. After that, zombies try to eat Lawnmower Man's brain as they are saying "brains". Next, two monsters (Godzilla and Mothra) are fighting as they fire their flames and lightning.

After that, there's a piano tied to a rope. If you move under it, the rope will break and the piano will fall on you. More zombies are attacking. Pogostick Man is in his vehicle "Sparta kicking" a zombie (by yelling "THIS IS SPARTA!", then kicking). Lastly, as you get to the end of the level, you'll finish the level by touching a trigger that triggers victory, as well as touching a "black hole", which will bring up the level's name and kirbypwnage's Facebook page. 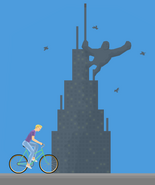 The battle between Godzilla and Mothra.
Add a photo to this gallery
Retrieved from "https://happywheels.fandom.com/wiki/Chaos_City?oldid=89341"
Community content is available under CC-BY-SA unless otherwise noted.