Start a Wiki
The bottle is the second smallest item found in the miscellaneous category in the level editor in Happy Wheels, trailing only the soccer ball. They were added in v1.37 on May 6th, 2011.

The bottles are all made of glass, and can shatter very easily, where they will burst into little glass-like particles. There are a few frequent level types that focus on the use of bottles.

The settings involve changing the bottle type, switching between sleeping and non-sleeping, and interactive and non-interactive.

It is unknown what the bottles contain, however, the red text on the yellow bottle resembles the word "Miller", a beer brand in America.

There are four bottle types, which are green, blue, red and yellow, with the latter having a different shape than the others.

Bottles behave similarly to the "Cock Cola" bottle found in Effective Shopper's cart, although these bottles are fully breakable, whereas hers, being made of plastic, only bursts open and spews cola. 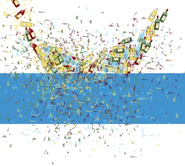 The yellow bottle, as seen here. The red text reads MILLER, referring to the Miller beer brand in America.
Add a photo to this gallery
Retrieved from "https://happywheels.fandom.com/wiki/Bottle?oldid=91009"
Community content is available under CC-BY-SA unless otherwise noted.