You will begin on the sidewalk, unable to move your wheelchair, with your arms and legs being blown around by a fan. Effective Shopper with a strange hairdo and a tattoo on her arm is standing behind you "pushing" your wheelchair. A bird defecates on the sidewalk. Lawnmower Man is sitting on a bench holding a drink up in the air (like he's greeting you with it) and a custom NPC child of Irresponsible Dad skates by on a skateboard.

You are supposed to press Z (by default) and fly into the air over a roof passing a billboard advertising a brand of cigarettes saying "LOUIE SMOKE IT!". If you are low enough, you'll see Wheelchair Guy sitting on the rooftop. If you're high enough, you'll see Irresponsible Dad fixing a satellite dish and Segway Guy climbing a ladder while holding a tool box (as if they're cable guys) wearing white helmets. You are able to grab any of them (or both) and slam them down on the ground in someone's property, landing on and shattering a glass panel that is inside the glass shed. This will scare a hostile brown boxer which will start barking (no sound is actually playing from the dog) and try to attack. Thankfully, it's on a leash that is tied to a pole.

Lawnmower Man with a pushable mower is standing behind the glass shed. If you land on him, he'll fall over and both of you might get killed by the mower exploding (as if the motor blew out). If you fly far enough, you'll land in another property and you'll see Irresponsible Son watching Effective Shopper chopping a watermelon at a table in their yard. If you land in the dumpster behind them, you'll notice that there's a hidden token that allows you to complete the level. If something touches the trash can, a fake wrecking ball will appear and kill Irresponsible Son, Effective Shopper, and possibly you.

Hobo on the rooftop. 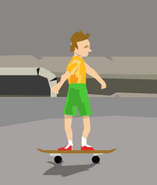 Irresponsible Son on a skateboard. 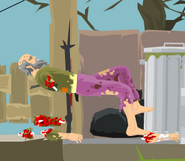 It is possible to get impaled by the fence.

The player being attacked by the dog.

A glitch caused by grabbing the ladder man's helmet.
Add a photo to this gallery
Retrieved from "https://happywheels.fandom.com/wiki/Backyard_Wrestling?oldid=77413"
Community content is available under CC-BY-SA unless otherwise noted.