You start out underneath a very large, hi-tech looking ship, far in front of a futuristic looking vehicle/ramp. Going left will reveal a secret vehicle that can be used to complete the level. As you go right, there is a flat space that you are tempted to cross, as it leads into a building. When you enter the building, bright text will appear on the ceiling reading "FINAL DUNGEON", and the ground turns into rubble as you proceed forward. You'll enter a room that has details from IAMURHUSBAND's previous level, string, as well as the string itself.

If you move close enough, it will turn into text that reads "Hi" containing a heart. Then it turns into a thin horizontal line, which will expand into a huge rectangle that will fall through the ground, and quickly blast through the ground and into the ceiling to squish you into pieces. The door opens allowing the player to move on. You proceed further into the building, reaching flat ground again, only to come across a large drop-off onto a lower floor. If you move left and touch the black wall after dropping down, the wall turns invisible, and the black wall will drop. Effective Shopper is standing on the edge of the "BEAR HOLE". You can push her into it, but as a result will allow you to enter the "PRINCIPAL'S OFFICE" later on. If you move right, there is a large furturistic-looking robot (similar in appearance to Dog from Half Life 2) that has its targeting laser pointed at you. It will say, "Locked on target!". The bullet then gets fired, but not where it was pointing the laser. Instead, it gets shot as if the cannon was not powerful enough. The bullet lands on 3 Segway Guys, blowing them up. The door has opened and you can continue on.

You'll come across a down ramp and fall onto a lower level. There is a large red button with text instructing you to "Eliminate JB". Ramming into the button will make "Justin Bieber" scream, allowing the player to assume that they have eliminated him. You fall into an even lower level, and there is an anime girl that is saying, "I can't allow you to pass!". As you ram into her, she'll become exposed. Hitting her again will make her become more exposed and eventually, loses all of her clothes (because of this, a box is censoring the nudity so the level will not get deleted as drawn nudity is against the level rules), giving you access to the next area.

Finally, the you reach the last "boss", a demonic gorilla sporting a spinning arrangement of blades that will alternatively rise and drop. Move under the blades and raise the cross to put an end to the demonic gorilla.

If you didn't push Effective Shopper into the bear hole​

Down the slopes is the "PRINCIPAL'S OFFICE" (which is not accessible without pushing Effective Shopper in the bear hole as seen earlier) and Headache Puppy of the Total Jerkface server. He'll shout "STOP REFRESHING PLEASE!!", then landmines placed below the ground will blow up. Before this happens, quickly burst through the door and get to the finish line.

If you DID push Effective Shopper into the bear hole

You'll enter the "PRINCIPAL'S OFFICE", which contains Pedobear holding some kind of cannon. It'll say "Thanks for your gift, but... TOO OLD DO NOT WANT". It will shoot an Effective Shopper at you, which may kill you. Behind you is a door that will open up when something touches it. Entering that "room" will lead you into a finish line

The beginning of the level with Segway Guy. 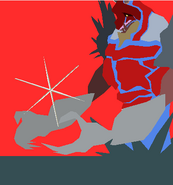 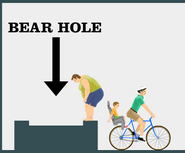 Pedobear.
Add a photo to this gallery
Retrieved from "https://happywheels.fandom.com/wiki/BOSS_BATTLE_MEDLEY?oldid=87494"
Community content is available under CC-BY-SA unless otherwise noted.