You start off in a generic park looking place, which has a custom lawnmower that is extremely similar to Lawnmower Man's lawnmower, a Wheelchair Guy NPC acting as a hobo, and Helicopter Man and Irresponsible Dad NPCs standing near a Porsche or a Corvette. Then, you meet up with another Wheelchair Guy NPC who is a scientist wanting to show you his lab. When you get into his lab, he needs you to test out his machine. When you go on the machine, it rapidly starts spinning and it transports you into a 3-D land. Segway Man is very confused where he is. Then, the level turns into a small obstacle course with Crushers. You then go on a moving platform which transports you to another place with "moving vectors". You get down to a bridge and then you go on a very fast moving platform that goes down. When you get the entire way down, you go left to pick up some TNT. You then move back to the right.

The beginning of the level.

Part of the laboratory.

After going in the machine. 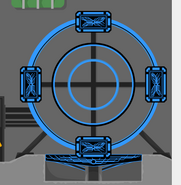 The moving vectors.
Community content is available under CC-BY-SA unless otherwise noted.
Advertisement