"Welcome Your goal is to...SURVIVE". is stated in a circle at the start of the level. First, there are rotating triangles with a spike right above them. After passing that, there will be the "*Epic Jump*" with a Wheelchair Guy NPC holding onto a rectangle shape for dear life. If you miss and go down the pit, you'll land on spikes and landmines and you might get blown up. At the bottom of the pit, there's text saying "OH CRA-" as if you failed.

Next, there are three chompers that might kill/rip you up and a rotating axe, followed by a few small circles and triangles that act like a domino effect with a wrecking ball right above and an arrow gun with bumpy terrain (bunch of circles). Next is a fragile glass panel with text that says "BE EXTREMELY CAREFUL HERE ;D". If you break the glass and fall, you'll land on spikes.

Now there is a ramp and a harpoon gun (not to mention there is text that says "Harpoon ahead! --->") with mines near it. The harpoon gun will try to shoot you, but there are circle shapes that might block the harpoon from hitting you. After that, there's text that say "Nice! Keep going!", followed by rotating circle shapes that you might get killed from with a rectangle shape just above them that will block you from going high enough to avoid the rotating circles.

Right after the obstacles, are two gaps with a saw blade (groups containing many triangles) in each one. They look like they're rotating pretty slow, but they're actually rotating very fast the other way. Above this, there's text that say "(This part can be hard)". Then, more text ahead and it says "Good! You're almost there!". Right after this, there is a "ramp" with a gap and a finish line. Once you touch it, the "ramp" will droop and you will fall. As you fall, there's text that says "OH NOOOOOOOOOO" as if you failed, followed by a few glass panels.

Lastly, as you fall to the bottom, you'll land on a finish line, as well as there's more text that says "Hey guys! Thanks a LOT for playing, it really does mean a lot to me. This is my third level, so I hope you guys like it. Feel free to rate this what YOU think it deserves (;D), and don't forget to save any awesome replays! -Mean". If you are able to make it over the gap without the help of the "ramp", you'll touch the "fake" finish line above the gap and finish the level. 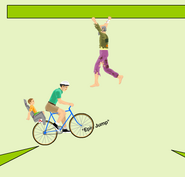 The other side of the finish line after the "ramp". 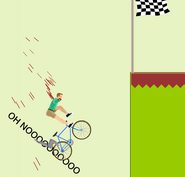 "OH NOOOOOOOOOO".
Add a photo to this gallery
Retrieved from "https://happywheels.fandom.com/wiki/--%3DlObst._Coursel%3D--?oldid=89183"
Community content is available under CC-BY-SA unless otherwise noted.